On Thursday morning, hip-hop renaissance man Tyler, the Creator provided a peek at some new designs he’s sketched out for his ‘90s-inspired fashion line, Golf Wang. For the most part, his fans fawned over the pink romper, red plaid pants, and pea-green blazer with a fuchsia flower on the back — all of which would have looked perfectly at home at his first-ever fashion show held earlier this week in L.A.

Most of his followers seemed to love the designs, but one guy was decidedly unimpressed, tweeting that “nobody gonna wear that shit.” And for that, this anonymous troll paid a heavy price as Tyler publicly eviscerated his own style. It was the kind of interaction celebrities have with Twitter assholes all the time, but this one proved especially interesting when Tyler zeroed in on the rolled-up sleeves on the kid’s shirt. This, apparently, was hilarious. 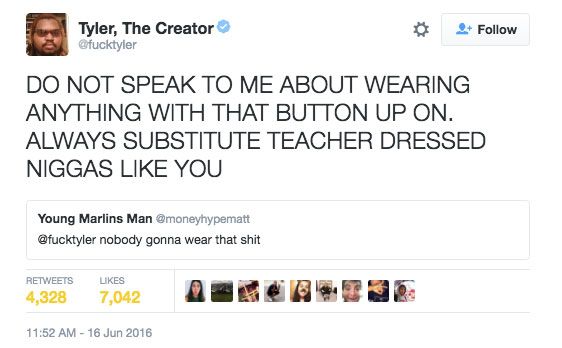 We at Beta Male are not style trendsetters, by any stretch. So maybe we missed something. But when did it become unacceptable to roll up one’s shirt sleeves? Or comical? Or even noteworthy? Tyler is clearly on the cutting edge — his fashion line looks like a Nicktoons’ afternoon slate come to life, so it would be no surprise to learn that he knows something about fashion that the common man doesn’t. But are rolled-up sleeves really that weird?

They certainly serve a utilitarian purpose when the weather’s warm. And they’re a great way to show off that forearm tattoo of your home state’s outline. But Tyler seems to be implying that if you want short sleeves, you should just wear short sleeves. The style editors at our top men’s magazines might want to take note.

The Definitive Guide to Rolling Up Your Sleeves http://t.co/OTAuNFkYfE pic.twitter.com/9cp6r30TVl

It's spring. Here's how to roll your sleeves like Ryan Gosling http://t.co/QoweUWerEa pic.twitter.com/9yVr1c0Qv0

Tyler, the Creator Denounces Rolled Sleeves
mfw spring 2023 8 mins ago
The Best Street Style at Milan Fashion Week Chic looks from this fashionable city.
trailer mix 26 mins ago
Jennifer Lopez Goes Full John Wick in The Mother Teaser Complete with training montage.
sunday circular 9:00 a.m.
10 Things That Delighted Us Last Week: From Sharp Shears to Sateen Sheets Including statusy bottles of olive oil, galoshes made from hemp plastic, and fake blood that’s perfect for spooky season.
retirement Yesterday at 11:29 p.m.
James Earl Jones May Be Hanging Up His Darth Vader Helmet Filmmakers recreated his voice on Obi-Wan Kenobi.
trailer mix Yesterday at 10:13 p.m.
You Goes to College in Season 4 Teaser Meet “Professor Jonathan Moore.”
coming soon Yesterday at 6:35 p.m.
Manifest, Netflix’s Most Unhinged Show, Is Back for a Fourth Season Whoever manifested more Manifest will be very pleased come November 4.
coming soon Yesterday at 5:21 p.m.
Glass Onion: A Knives Out Mystery Gives Us Our Second Clue (a Clip) Daniel Craig returns to investigate the goings-on of Edward Norton’s Greek island.
coming soon Yesterday at 5:01 p.m.
Watch Naomi Watts + Bobby Cannavale Watch for the Watcher in The Watcher Trailer Only Ryan Murphy would harass us with a promo this bewildering.
coming soon Yesterday at 4:08 p.m.
The Crown Season 5 Returns to the Throne The royal family is coming back to Netflix.
rip Yesterday at 2:09 p.m.
Legendary Saxophonist Pharoah Sanders Dead at 81 He “died peacefully surrounded by loving family and friends” in Los Angeles on Saturday morning.
review Yesterday at 1:59 p.m.
At Gucci, Double the Clothes But Little Direction “Clothes are not enough today,” says Alessandro Michele backstage, as he grappled with the modern conditions for a creative director.
By Cathy Horyn
exhibit a Yesterday at 9:00 a.m.
It’s Blindingly Clear the Feds Failed to Investigate Trump’s Finances Letitia James’s fraud lawsuit is also an indictment of the Justice Department.
rip Yesterday at 12:59 a.m.
One Flew Over the Cuckoo’s Nest Actress Louise Fletcher Has Died The 88-year-old was also known for recurring roles on shows like Star Trek: Deep Space Nine and Shameless.
overnights Sept. 23, 2022
Los Espookys Recap: Oh No, My Bibi-lungs! Our typically nonconformist crew is flirting with the idea of following the rules.
bah humbug buddies Sept. 23, 2022
Will Ferrell and Ryan Reynolds to Sing a Modern Christmas Carol Apple is adapting the Dickens classic as a musical comedy called Spirited.
coming soon Sept. 23, 2022
The Original High School Musical Cast Is (Almost) All in This Together “This” being season four of High School Musical: The Musical: The Series.
overnights Sept. 23, 2022
RuPaul’s Secret Celebrity Drag Race Recap: Celebrity Snatch Who thought this was a good idea?
allegations Sept. 23, 2022
Constance Wu Alleges Sexual Harassment, Intimidation on Fresh Off the Boat She says she kept quiet about the way a senior producer treated her because she didn’t want to stain the historic show’s reputation.
design edit Sept. 23, 2022
Nature-Inspired Glass Lighting, Soft Seating at Lincoln Center, and More Finds Plus a monument to a historic Filipino settlement in Louisiana.
always shopping Sept. 23, 2022
22 Affordable Sweaters That Look Expensive The best way to prepare for sweater season without spending a fortune.
By Brooke LaMantia and Andrew Nguyen