The perfect summer suit should accomplish a few important things. It should be made of cotton rather than wool so that when you sweat, it doesn’t reek. It should be a two button because three buttons are square and one button is too … Lagerfeld. It should be khaki or navy (maybe a light grey but never black).

Two years ago, in search of a suit for four summer weddings, I hit a few retail standbys and found my quarry surprisingly elusive. The fabric on the A.P.C. suit was too drapey. The shade on the Club Monaco was more midnight than navy. And I was too old for something from Topman, wasn’t I? I was about ready to give in to J.Crew’s Ludlow, whose ubiquity among a certain subpopulation of urban males will shatter any notions a person might have about individual self-expression. That is, until I chanced upon the suit rack while shopping for bathing suits at Barneys. 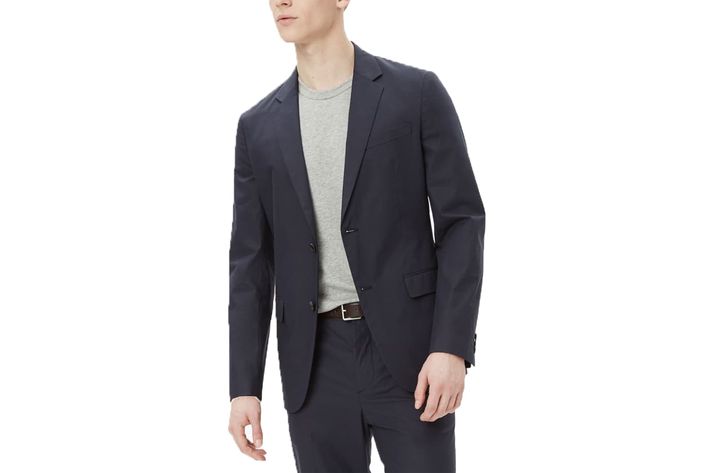 The suit I landed on came from — of all places — Theory (you can still buy it here and here, where the jacket and pants are inexplicably sold separately). Slightly generous in the trunk, the jacket had to be taken in a smidge, but I could justify the expense for a suit that ticked all the boxes — a cheery navy two-button in a fabric that screamed “cazh”— without being overly precious or expensive. The jacket’s shoulders, thankfully without any padding, hit right at the ends of my own. The sleeves were relaxed with an ever-so-slight taper. The width of the lapel looked like it was conjured just to sit next to my dress shirt’s semi spread collar.

Even better, at 97 percent cotton and three percent elastane, the material had enough give for sitting long stretches in cheapo lawn chairs and getting down to “Thriller” (times four). It became my go-to suit through the summer months, from a wedding in Palm Springs to a graduation party in the city to a birthday party on a bus.

My favorite thing about the suit, though, is that it’s not chic (no Theyskens’ Theory here). At its most elemental, the summer wedding suit should respect the spirit of the event: Be appropriate and be invisible. No, it’s not a Dries number or a Thom Browne ensemble. It’s not even a Ludlow, which, in its way, is fashion (“No! J.Crew?”). Theory is the utility workhorse of the closet, the uniform of the tasteful office type. Theory is Nordstrom. And you’ll never upstage the bride in it.

Plus, what to wear with it: 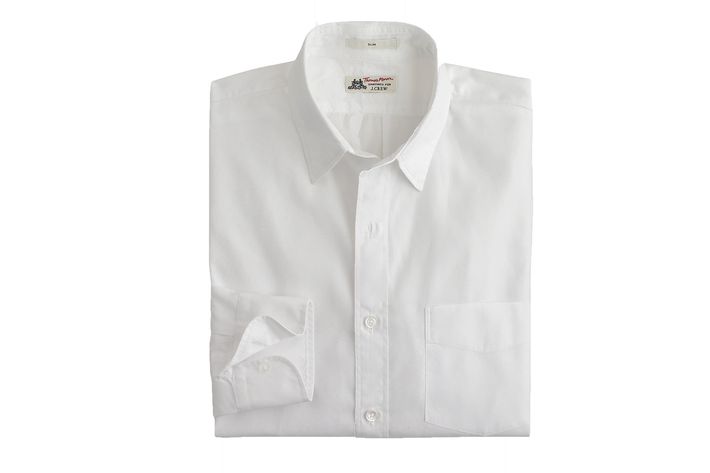 Slim Thomas Mason for J.Crew Shirt
It’s a little pricier than the standard J.Crew dress shirt, but you’ll feel the difference in the fabric’s opacity and quality as soon as you touch it.
Buy It: $148 at J.Crew 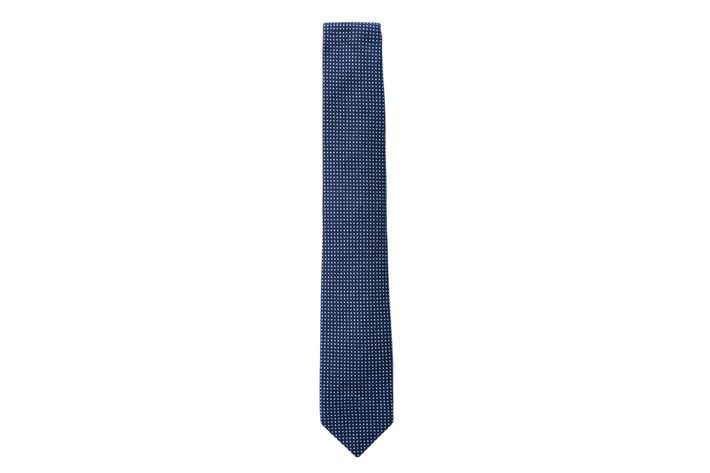 Indigo Wabash Polka Dot Necktie
The New York-made tie (by a label spun-off from the since-closed Williamsburg shop Hickoree’s) looks almost like a solid until you get up close and spot the dots.
Buy It: $85 at Need Supply Co. 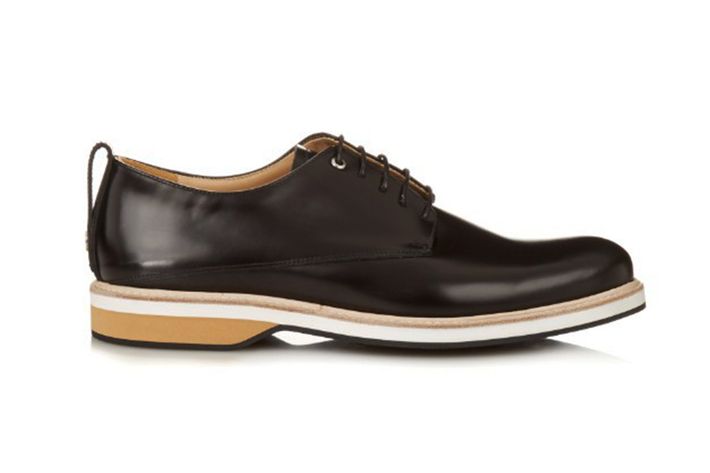 WANT LES ESSENTIELS Montoro Leather Derby Shoes
Okay, these are something of a statement, but when the rest of your outfit is that understated, the shoes should have some pop, which the contrast colors on these soles certainly do.
Buy It: $495 at Barney’s

The Best Suit for Summer Weddings
midnights era 12:17 a.m.
Wait, Is Taylor Swift Just Giving Us Straight Answers? Holding out for a (anti-) hero.
overnights Yesterday at 11:01 p.m.
Interview With the Vampire Series-Premiere Recap: Let the Story Seduce You The first episode of AMC’s Anne Rice series has it all: Sex! Catholics! New Orleans! Mind control!
overnights Yesterday at 11:00 p.m.
American Gigolo Recap: You Pay Me So I Leave Gigolo Julian is back thanks to an injured dog, in case there was any doubt we’re supposed to think he’s a good guy.
obits Yesterday at 10:47 p.m.
Actress and Activist Sacheen Littlefeather Dies at 75 She refused Marlon Brando’s Oscar and was blacklisted for it.
overnights Yesterday at 10:06 p.m.
The Walking Dead Midseason-Premiere Recap: Beginning of the End Intriguing opening tease aside, so far part three is idling when it should be revving up.
fire and blood Yesterday at 10:02 p.m.
Wow, It Kinda Sucks to Be a Velaryon Right Now, Doesn’t It? More money, more incest-caused problems!
overnights Yesterday at 10:02 p.m.
House of the Dragon Recap: Bastards and Broken Noses The various dispersed Targaryens descend on Driftmark, and bring with them their genetically endowed abilities to be uniquely awful.
theater review Yesterday at 10:00 p.m.
Tom Stoppard Imagines His Family’s Mostly Forgotten Past Leopoldstadt recounts 50 years—including the darkest ones—in the lives of a Viennese family.
overnights Yesterday at 10:00 p.m.
Power Book III: Raising Kanan Recap: A Snitch in Time This is not good for Marvin, and it’s sure not good for Raq.
overnights Yesterday at 9:00 p.m.
The Serpent Queen Recap: Stealing Castles, Taking Names Never underestimate your enemy.
weekly crossword Yesterday at 8:55 p.m.
The New York Crossword: ‘Never Gonna Happen’ 65-Down: Amount of butter or bathwater.
astrology Yesterday at 8:30 p.m.
Madame Clairevoyant: Horoscopes for the Week of October 3 Mercury retrograde has finally ended. Although its effects will take time to wear off completely, we can all breathe a sigh of relief.
By Claire Comstock-Gay
bitch era Yesterday at 8:19 p.m.
Emily Ratajkowski Demands We Enter a New ‘Bitch Era’ Stop romanticizing sadness, start romanticizing rage.
sex diaries Yesterday at 8:00 p.m.
The Writer Staying on Her Crush’s Couch This week’s sex diary.
vulture sports Yesterday at 7:03 p.m.
Terry Bradshaw Was Treated for Multiple Cancers This Year The sportscaster made the announcement on Fox NFL Sunday.
swiftie reveal Yesterday at 6:17 p.m.
Christian Bale Drowned Out Taylor Swift’s Singing on the Set of Amsterdam David O. Russell told him to “shut up for this one and let Taylor do it.”
overnights Yesterday at 6:14 p.m.
Ramy Recap: Seduced by the Devil The new toxic, messy, haram Dena is certainly entertaining, but she’s gotten herself into Ramy territory here.
thanks i hate it Yesterday at 6:08 p.m.
Kylie Jenner’s Bleached Eyebrows Look Very Familiar Kim Kardashian’s little sister is following in her footsteps.
overnights Yesterday at 6:07 p.m.
Ramy Recap: The Lord of the Bling This episode reminds me of The Office.
snl Yesterday at 4:45 p.m.
Bowen Yang’s Spotted Lanternfly Is Unbothered by the Haters on SNL “I’m just trying to live my life, find a mate, and have three to four thousand babies.”