Advertiser Content from
This advertising content was produced in collaboration between Vox Creative and our sponsor, without involvement from Vox Media editorial staff.

How a Jazz Musician Found Family Stories He Never Knew

Christian Sands, a 31-year-old jazz musician, started playing piano at the age of 1. His parents made a point to keep all kinds of art and literature around the house for a holistically creative environment. But as far as family heritage was concerned, “there were gaps,” said Sands. Despite various stories and names he heard growing up, it wasn’t clear how they all connected. This led to a natural curiosity — and not far behind it, exciting discoveries — about his family, heritage, and personal story.

Sands grew up hearing what he called “tall tales” about his family. Names and places were thrown around, but it wasn’t until he took a journey with Ancestry that things started to fall into place. The bits and pieces he’d learned from his parents suddenly came to life in the form of images, documents, and facts about family members he had never known. With Ancestry, Sands had the unique opportunity to explore his rich history starting in Cape Verde, Africa (to his surprise). Inspired by his 5th great grandfather — who was known in his community as a musician and activist — Sands composed a musical masterpiece with his familial roots in mind. He gifted the final piece to his parents as an early celebration of heritage going into the holiday season.

Read on for Sands’ creative process as he discovered unknown details about his family story.

How did you first get into music?
I first started playing the piano as a baby, but I didn’t start with formal lessons until I was 4. We had a full-size piano at home, but I also had a small Celeste piano that my great aunt bought for me so I could start early. A friend of the family and musical director at our church suggested my parents put me in piano lessons (I guess she saw something early on that no one else did). It took a few years, but they eventually found someone willing to teach a 4-year-old how to play piano, and I’ve been surrounded by music ever since.

When you first discovered your family information on Ancestry, what did you do?
I decided to compose a piece inspired by my 5th great grandfather’s origin. He was a “musician, activist, and man of the people” according to documents I found on Ancestry. When I saw this, I immediately started researching music and literature from the mid 1800s when he was alive. I had heard some of it before, like abolitionist songs, but I wasn’t too familiar with the music from Cape Verde of that time. So I started listening to the different styles, “Batuka,” “Coladeira,” “Funanå,” etc. Since my grandfather was originally from Cape Verde, I decided to write in one of the island’s oldest styles, the Cape Verdean Morna, a style that originally comes from the island of Boa Vista. I chose this because it was something that resembled similar ideals of the American Blues with its yearning lyrics and solemn sound. I think he would’ve really liked the piece, and might’ve even played it himself.

How did your parents react to the gift?
My parents were so surprised and happy. My father knew some information about our family from his childhood but they were smaller details. It felt great to share our deeper history with Cape Verde with him in particular because many of his questions have now been answered. I mean, at this point, they’re used to my compositions and performances — but they did really enjoy the route the music took and the style I chose, since I don’t typically write in a traditional Cape Verdean style. My brother played it with me, which made it a full family experience.

I remember doing family tree projects and having the smallest one in class because I could only go back so far.

How did you feel going through the documents and photos you found on Ancestry?
I felt so many different emotions but overall, I felt overwhelming joy. I grew up not knowing where my family was from. This process reminded me of growing up in a majority white area and being one of four African Americans in my entire school. I remember doing family tree projects and having the smallest one in class because I could only go back so far. To now have the unknown pieces that fit into my family tree and to hear how important they were to American history is priceless. 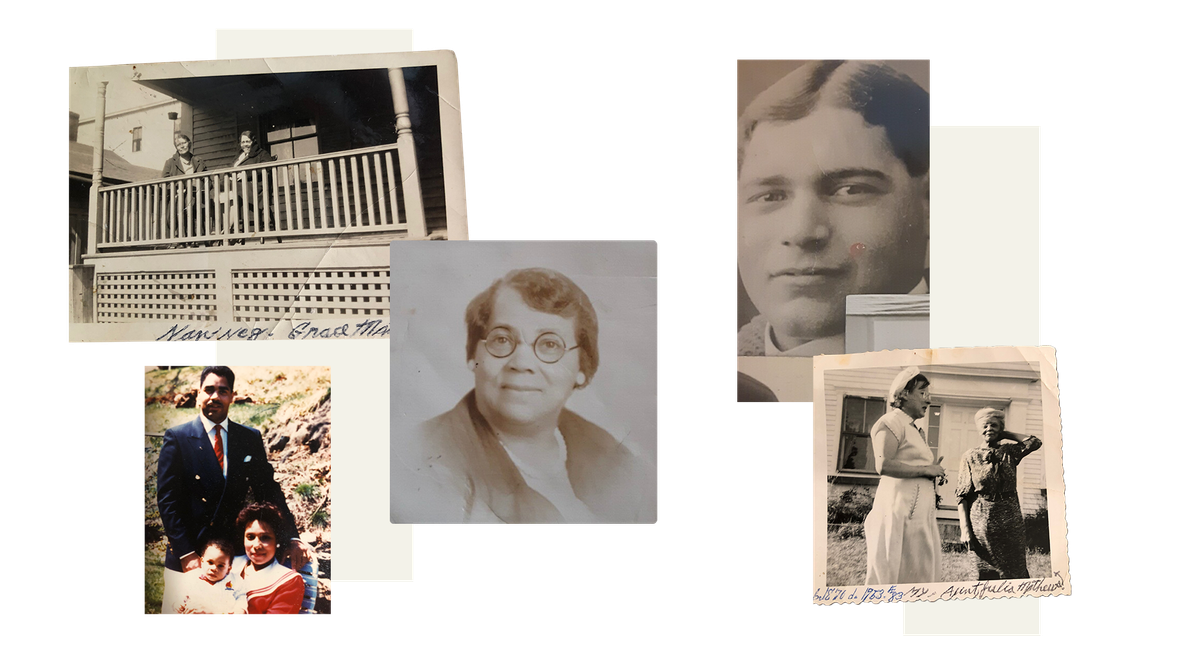 It’s incredible to discover on Ancestry that your 5th great grandfather was also a musician. How has your perspective around your identity changed in this process?
After discovering so much of my family history with Ancestry, I feel more completed in my identity. I feel a deeper connection to myself and my family after not only learning about my ancestors but also learning what they stood for in society. It’s something I can proudly tell my future children, their children, and so on. Ancestry has given us a place to answer some of the questions we’ve had in our family for generations. It’s given us a map that connects us directly to our ancestors. My family is actually now in the process of planning trips around the world to see the important places we’ve discovered in our findings. I’d definitely recommend starting the process of family discovery because you never know what it could lead to — whether a story, an address, a photo, or even music.

Are you proud of your family history?
I’m very proud. Being related to someone who stands for something is truly special. Hopefully we, as members of his family and people of the world, can continue what my 5th great grandfather, his wife and his friends started and stood for: togetherness, equality, and family.

Share the gift of discovery with your family and friends this holiday season. Get started with Ancestry.

+Comments Leave a Comment
Meet the Musician Who’s Determined to Know His Ancestors
the national interest 20 mins ago
How Never Trumpers Are Becoming Pro-Democracy Republicans Republicans who left the party over Trump are staying away over authoritarianism.
just married Yesterday at 11:42 p.m.
The Fifth Time’s the Charm for New Groom Nicolas Cage The actor wed girlfriend Riko Shibata in Las Vegas last month.
gawrsh Yesterday at 9:35 p.m.
Disneyland, California Theme Parks, Sports Stadiums May Reopen April 1 At a limited capacity with mandatory mask use, of course.
overnights Yesterday at 9:30 p.m.
RuPaul’s Drag Race Recap: To Freedom!! We’re only at mile 13 in the marathon that is this season, but thankfully Snatch Game has arrived to sustain us.
fantasy Yesterday at 8:00 p.m.
Spielberg, Duffer Brothers Charm Netflix With Stephen King’s The Talisman The Stranger Things siblings are developing a TV series based on the 1984 fantasy novel by King and Peter Straub.
haunted houses Yesterday at 7:56 p.m.
Storied and Sordid: The History of Jeffrey Epstein’s Just-Sold Mansion Whoever bought it will be only the second real occupant.
covid-19 stimulus Yesterday at 7:23 p.m.
What Will Parents Get From the COVID-19 Relief Bill? Between a third stimulus check and enhanced child tax credits, low-to-moderate-income parents would get a lot of help — though it could be temporary.
videology Yesterday at 6:50 p.m.
Spring Has Sprung in SZA’s ‘Good Days’ Music Video The singer hangs out with some fungi before teasing the upcoming visuals for “Shirt.”
piano Yesterday at 6:46 p.m.
Purchasing a Piano: A First-Time Buyers Guide From a brand-new Steinway to a found-on-Craigslist Baldwin Grand.
this week in late night Yesterday at 5:58 p.m.
Minari’s Alan Kim and his Purple Belt Won Late Night This Week In a week dominated by WandaVision, Minari’s adorable breakout star rose to the top.
why this looks like that Yesterday at 5:48 p.m.
Jolie Ngo’s Ceramics Are Made for Instagram (And That’s Not A Bad Thing) How the artist makes her wildly popular, 3D-printed vessels.
the big screen Yesterday at 5:45 p.m.
Less Popcorn, More Distance: How Indie Movie Theaters Are Gingerly Reopening “We wanted this to be an inclusive experience and not just for the fearless.”
oscar futures Yesterday at 5:42 p.m.
Oscar Futures: Can Surprise Globe Winners Keep Up Momentum? As Oscar voting gets underway this week, the Globes gave the Academy a vision of Nomadland and Andra Day triumphant.
By Nate Jones
you can do this Yesterday at 5:40 p.m.
How to Do Your Own Brazilian Wax at Home, According to People Who’ve Tried Proceed with caution.
ask a cool person Yesterday at 5:30 p.m.
What Are the Best Men’s Chinos? A lot of Ralph, one pair for $20, and many with some secret stretch.
second acts Yesterday at 5:30 p.m.
25 Famous Women on Getting Older Diane Keaton, Maya Angelou, Helen Mirren, and more women on aging.
By Julie Ma
tea-mz Yesterday at 5:28 p.m.
Terms of Service: Your Guide to the Lingo of TeaTube From Adpocalypse to Tati Westbrook, all the shorthand to make you fluent in YouTube drama.
By Daysia Tolentino
close reads Yesterday at 5:25 p.m.
My Spirit Left My Body Watching This Ginny & Georgia Scene Oppression Olympics … let’s go?
screen time Yesterday at 5:07 p.m.
I Can’t Wait to Dress Like I Shop at Party City Deck me out in marabou feathers and fringe.
movie review Yesterday at 4:53 p.m.
Boogie Needs to Grow Up Eddie Huang’s directorial debut is an Asian American coming-of-age story that could use more self-examination.