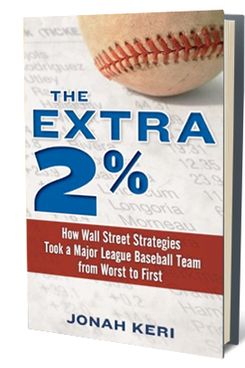 One of our favorite new baseball books is Jonah Keri’s exhaustive, intelligent The Extra 2%, which chronicles the rise of the Tampa Bay Rays over the last half-decade, how they did it, what they had to overcome, what it means for the world of baseball and the world of business. We’ve spoken with Keri before about the Rays, but today we sit down to discuss why his book is like Moneyball and why it isn’t, what Vince Naimoli would think of it, and whether the Rays are a challenge to the Yanks this year.

So, how is your book different than Moneyball?

Michael Lewis might be the best nonfiction writer working today. He’s a fantastic reporter and tremendous writer. One of the most powerful aspects of his writing is the way he locks in on one key theme, then goes down the road with it. In the case of Moneyball, that theme was how to use numbers to beat the competition in baseball. Everything flowed from there, and the narrative went accordingly. Scouts were presented as fat, backwards antagonists. It was great fun to watch this stats-versus-scouts conflict play out over the course of the book.

For better or for worse, I take a broader approach. The Extra 2% isn’t about stats versus scouts. It’s about gaining that 2 percent edge in everything you do. The way that 2 percent presents itself is multifaceted. The Rays have a terrific analytics department full of unheralded people doing amazing things. But that analytics department’s impact is diminished if not for Joe Maddon, the most open-minded and intellectually curious manager in baseball. The Rays are also thinking about marketing, stadium negotiations, player contract negotiations, trades, arbitration hearing, bobblehead giveaways, in-stadium concerts, how to delegate, who to hire, and a thousand other things.

If you like baseball, there’s a good chance you’ll like this book. But even if you don’t care about the Rays, or don’t want to be bothered with advanced baseball concepts, there’s something there for you. There’s plenty of storytelling, and plenty of useful business concepts here. If you run a neighborhood gas station, or you’re pushing to get ahead in your middle manager job at Google, the idea of finding that 2 percent edge is relevant and relatable.

You make a great case that the Rays front office has succeeded in part because of Wall Street-type techniques and strategies. But don’t people hate Wall Street right now?

You can approach the Wall Street branding of the book a few ways.

Here’s the cold, cruel version: Say whatever you want about Wall Street and the financial crisis of 2008 … but didn’t those guys come out ahead in the end? The government provided a gigantic safety net. A few companies went under, but the biggest ones eventually flourished. Goldman Sachs surged to record profits.

Here’s the more pragmatic version: Every entity, nations, religious groups, adult dodgeball teams … all of them have their bad eggs. There are cheats and scoundrels working on Wall Street just as surely as there are cheats and scoundrels in law enforcement, at your weekly poker game, and probably the old folks’ home too. That doesn’t nullify the positive elements inherent in all of these entities, just as it doesn’t negate the value of the shrewdest Wall Street approaches.

Some people hate Wall Street categorically right now. Many more people recognize that part of the system stinks, and part of it has much to teach us about running a business.

There’s a great anecdote about Andrew Friedman playing RBI Baseball in his office. That reminded us of the time Matthew Silverman bought a blogger’s fandom on eBay. That is to say: There’s an ingenuity and goofiness to them that’s endearing, and even a little inspiring. Are you a Rays fan now? Will reading the book turn people into Rays fans?

Funny you mention Matthew Silverman buying a blogger’s fandom on eBay — that’s in the book too! This is absolutely a team that will try anything, that takes itself seriously enough to be respected, but not too seriously that they can’t have a good time.

I was born and raised as a Montreal Expos fan. My team no longer exists. I will never love another team in any sport like I loved the Expos. But yes, I do support the Rays now. That doesn’t mean I ignored the mistakes the team made in its journey from worst to first; the Pat Burrell signing gets properly slagged, for one. But I do find the Rays likable, from the players to the anonymous scouts and number crunchers who form the backbone of their operations.

I do think there’s an excellent chance you’ll start rooting for the Rays after reading this book. At the very least, you’ll gain a greater appreciation for how a team can win the AL pennant with a payroll one fifth and one third the size of their biggest rivals.

Are they getting any closer to securing something long-term down there? Have we seen at least some incremental increases in fan devotion there? Will they ever be able to spend money?

The more I learn about this team, and baseball in general, the more it becomes apparent that attendance shouldn’t be the only gauge of fan interest, and isn’t the only way to make money. The Rays had the fifth-highest local TV ratings in MLB last year. Higher than the Dodgers. The Dodgers who play in Los Angeles. That’s jarring.

The stadium (and attendance) remains a major issue of course, though you have to look a couple moves ahead to see why. Stuart Sternberg bought majority control of the Rays five-plus years ago for $65 million. Forbes now values the Rays over $300 million. Paper and actual profits have been made. Two division titles were won. If Sternberg keeps staring at a community with a decimated housing market, sky-high unemployment, fervent anti-taxing and spending sentiments, and other factors which would prevent a new ballpark from being built, one has to wonder how long he stays. If he goes, Silverman and Friedman and the many brilliant people working in that organization might follow suit. And if that happens, you’re left with a team in a lousy ballpark in a lousy location, with limited resources, playing in the toughest division in North American pro sports that no longer has a great management team running the show. Even more than Evan Longoria blowing out his knee, that’s the real doomsday scenario.

We secretly kind of like that stadium. Is that stupid?

Well, I like it, too. But I love baseball, and I grew up watching games in a dome. So we might be unique. You do need some kind of roof to play in Florida. It’s brutally hot and rains all the time for most of the baseball season. The ideal scenario would be building something like the waterfront stadium they proposed a few years ago: retractable roof, cool design, great amenities, stellar location. As much as you and I might like the Trop, the Rays need to find a better location that’s more accessible to the broader region, as well as a design and feeling of novelty that will motivate the business community support they desperately need.

If Vince Naimoli read your book, what would he say?

“Do you know who I am? I’m Vincent Joseph Naimoli, and I think you’re an asshole.”

How is this year’s team going to be? Can they finish ahead of the Yankees or the Sox?

Sox, unlikely. Yankees, doable. The Yanks will trot out a better lineup and better bullpen. But the gap between the two starting rotations could be huge, in the Rays’ favor. After Sabathia and Hughes, the Yankees could be in real trouble. Meanwhile, the Rays’ rotation could actually be better with Matt Garza about to be replaced by Rookie of the Year front-runner Jeremy Hellickson. The wild-card race could also include the runners-up in the Central and West divisions, and might go right down to the wire. Should be fun, and should take one more step toward convincing people that the Rays are for real, and that they’re not going away.

A Q&A With Jonah Keri, Author of The Extra 2%
departures 12:07 a.m.
Trevor Noah Is Leaving The Daily Show After Seven Years “Honestly, I’ve loved hosting the show. It’s been one of my greatest challenges. It’s been one of my greatest joys.”
midnights era 12:03 a.m.
Wait, Is Taylor Swift Just Giving Us Straight Answers? Not like the videogame. Or maybe exactly like the video game?!
into the ramy-verse Yesterday at 11:13 p.m.
Ramy Regrets Ramy-ifying His Character’s Name A Ramy by any other name would be just as funny.
trailer mix Yesterday at 10:12 p.m.
Doctor Florence Pugh Will See You Now in The Wonder Pugh will star in a new period piece set in 1862’s Ireland.
gifts they might actually want Yesterday at 10:05 p.m.
25 Tech (and Techish) Gifts Under $50 It’s stuff most anyone will be delighted to unwrap — and use, because the worst thing about a tech gift is when it sits in a corner collecting dust.
By The Editors
overnights Yesterday at 10:01 p.m.
Monarch Recap: A Boy and His Bull Luke wanted to impress his father by being good at bull-riding, but everyone involved is better suited to be a rodeo clown.
the sports section Yesterday at 8:13 p.m.
Aaron Judge Did It The Yankees slugger hit his 62nd home run, breaking a still-sacred baseball mark. He’s also having a pretty good season in other categories.
trailer mix Yesterday at 7:16 p.m.
Danielle Deadwyler Transforms Into Mamie Till-Mobley in New Till Trailer Recounting Emmett Till’s lynching at the hands of racist Mississippians and his mother’s fight for justice.
crane family reunion Yesterday at 6:14 p.m.
He’s Still Listening: Frasier Is Getting a Paramount+ Revival The multi-cam spinoff has been officially ordered to series.
the law Yesterday at 6:05 p.m.
Brad Pitt and Angelina Jolie’s Expensive Lawsuit Over Cheap Rosé, Explained Jolie has filed a new cross-complaint against Pitt.
sister sister Yesterday at 5:59 p.m.
Dune: The Sisterhood Casts Its Founding Mothers The HBO shows tracks the spicy beginnings of the Bene Gesserit.
pfw spring 2023 Yesterday at 5:30 p.m.
A Comedy of Errors at Paris Fashion Week This has been an utterly ridiculous Paris season, in the best and worst sense. And it’s not over yet.
By Cathy Horyn
fashion Yesterday at 5:29 p.m.
How Bella Hadid’s Spray-on Dress Was Made We were just as confused. So we found out.
this things incredible Yesterday at 5:16 p.m.
This Product Helped Me Kick My Dry-Shampoo Habit I’d wash my hair in the morning and need dry shampoo in the afternoon.
celebrity Yesterday at 5:04 p.m.
Angelina Jolie Claims Brad Pitt Choked One of Their Children In her countersuit against Pitt, Jolie also alleged he poured beer on her and their children during the 2016 plane incident.
remembrance Yesterday at 5:00 p.m.
Loretta Lynn Was Fearless She created a world where women had permission to tell their truths.
By Marissa R. Moss
memoirs Yesterday at 4:50 p.m.
7 Revealing Stories From Constance Wu’s Memoir, Making a Scene Including sexual-harassment accusations on the set of Fresh Off the Boat and why she sent those tweets.
power Yesterday at 4:24 p.m.
‘Pro-Life’ Candidate Denies Report That He Paid for an Abortion Herschel Walker’s own son denounced him after an alleged ex-girlfriend told the Daily Beast that Walker had paid for her abortion.
music notes Yesterday at 4:02 p.m.
A Tour of the Tolkien Lore in the Rings of Power Score Courtesy of series composer Bear McCreary.
vulture lists Yesterday at 4:00 p.m.
The Best Books of 2022 (So Far) A few novels, a transcendent memoir, and an old Greek tale to enjoy by the fire.