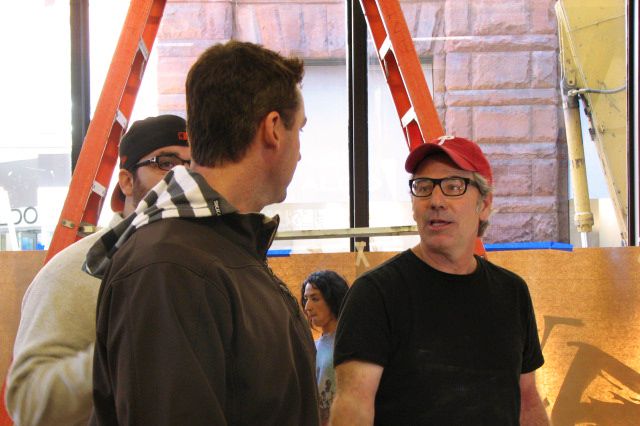 If you walked by the old Tower Records store on 4th Street and Broadway yesterday, you saw a construction zone, a familiar sight over the last four-plus years since the iconic NYU record store shut down. But if you walk by there tomorrow, you’ll see something new entirely: two dudes sitting and watching baseball. You’ll see that every day for the next six months.

A month back, Major League Baseball put out an ad for a “dream job,” which involved sitting in an apartment in New York City and watching every single baseball game all season. It turns out, the “dream job” was living in the MLB Fan Cave, which opens tomorrow.

The two men who will be living in the “cave” are Mike O’Hara, 37, and Ryan Wagner, 25. They will stay in the space, fishbowl-like, for every day of the regular season. The cave features three 60-inch screens and twelve 32-inch screens, with every game running at all times. It also will feature pool tables, a “Bud Bar,” a tattoo studio, a D.J. booth, a pitching mound, and, helpfully, Ms. Pac-Man.

It’s part of MLB’s social-media strategy — fans who walk around outside are encouraged to use touch screens outside to “tweet at the cavemen!” — and is a fascinating short-term project. (They have rented out the space for only one year.) There is an event space downstairs, complete with “Champagne rooms,” for private events. MLBFanCave.com will also have regular “webisodes” involving O’Hara and Wagner, and they will do daily live check-ins with the crew of MLB Network. “We consider it like an ongoing Broadway show,” says Jeff Heckleman, a PR staffer for MLB.

The whole project has come together shockingly quickly; O’Hara and Wagner learned they’d be spending the next six months in a room together just two weeks ago. The space is still heavily under construction; yesterday, we actually stepped on a live cordless power saw. The construction, which everyone claims will be ready by tomorrow (something that, considering the chaos we saw yesterday, strikes us as unlikely), is being supervised by Paul DiMeo of ABC’s Extreme Makeover, who was there yesterday filming the process and introducing O’Hara and Wagner to what they were in for.

If you’re sad that you weren’t chosen for the “dream job,” blame your lack of acting experience. Both O’Hara (a Yankees fan) and Wagner (an Orioles fan) are professional actors. O’Hara is a stand-up comedian who had a walk-on part as a waiter in Parks and Recreation, and Wagner is a stage actor who left a traveling road show of The Wizard of Oz in Cheyenne, Wyoming, to join the Fan Cave experience. (He was the Cowardly Lion’s understudy.) “We both have a sketch-comedy background,” Wagner says, “so we’re ready for the experience.” O’Hara says he hadn’t found much luck during pilot season — he also is in a band called the Mighty Regis — and figured this would be “an awfully fun gig.”

The Fan Cave will not be open to the public ordinarily, but you can walk by anytime there’s a game on over the next six months, and you’ll see O’Hara and Wagner watching games, filming webisodes, and sitting on the couch. So if you’re wondering what the heck is going on in there when you drunkenly stumble by at midnight, that’s what’s going on. Feel free to tweet at the cavemen.

The Old Tower Records Space on Broadway Is Becoming an ‘MLB Fan Cave’
interior design 15 mins ago
Did a Retouched Architectural Digest Photo Cover Up Stolen Relics? Now you see the Cambodian antiquities; now you don’t.
collaboration station 26 mins ago
Welcome to the Inside of Ye’s Mind Here’s a look inside Yeezy x Gap’s Times Square takeover.
alternate endings 6:35 p.m.
Better Call Saul Could Have Ended Very Differently Jesse in prison, Gene in color, and the other possibilities considered, sincerely and in jest, for the end of this decade-and-a-half-spanning saga.
mac-ken-zie da-vis 6:24 p.m.
MacKenzie Davis Shows a Massive Respect to Stath Lets Flats Watch her go. Watch her go.
clear eyes full hearts 5:59 p.m.
W Magazine’s Uncanny Valley TV Cosplay, Ranked From last-minute Halloween costume to, well, store-bought Halloween costume.
the city politic 5:57 p.m.
Mondaire Jones on the Need to Meet Progressive Expectations The congressman talks about switching districts, how Democrats can win the midterms, and why America’s problems go beyond Trump.
encounter 5:36 p.m.
Alex Wagner Is Ready for Anything The 44-year-old journalist meets her moment as the new face of MSNBC.
By Karen K. Ho
batter up! 5:27 p.m.
All of A League of Their Own’s Nods to the 1992 Peaches Of course the Prime Video series knows “there’s no crying in baseball,” but that’s just the beginning of its many winks to the movie.
rip 5:20 p.m.
Wolfgang Petersen, Das Boot and The NeverEnding Story Director, Dead at 81 The German director defined action thrillers for a generation with films such as In the Line of Fire.
just checking in 4:56 p.m.
So What Is Rudy Giuliani Up to These Days? Trump’s former attorney has been keeping busy by dealing with January 6–related legal woes, making weird videos, and arguing with parade hecklers.
nicki voice: it's the remix 4:42 p.m.
Rogue One to Be Rereleased With a Sneak Peek at Prequel Series Andor Ahead of the Disney+ series’ September 21 premiere.
a long talk 4:27 p.m.
Kim Wexler’s Curtain Call Better Call Saul’s Rhea Seehorn looks back on six seasons spent getting inside ‘an extremely inscrutable character.’
By Jen Chaney
gifts they might actually want 4:00 p.m.
A Gift for Every Type of Mom Whether she does tarot readings or is training for a half-marathon, we’ve found the perfect present.
By The Editors
gifts they might actually want 3:45 p.m.
29 Gifts Under $5 (That You Can Buy on Amazon) Including food gifts, dog toys, and self-care essentials.
By The Editors
the o group 3:35 p.m.
Wait, How Many Homes Has Selling Sunset Star Chrishell Stause Sold? “As of June, I think I’ve done seven deals so far in real estate …”
early and often 3:35 p.m.
2022 Midterms: A Guide to the Races Worth Watching A cheat sheet to keep track of all the crucial races, primary upsets, and campaign drama — Trump-fueled and otherwise — from now through Election Day.
early and often 3:30 p.m.
Trump Wants to Make America Vote Like It’s the 1960s His demand that all voting occur on Election Day, in person, and via paper ballots would radically restrict voting nationwide.
gone sale-ing 3:20 p.m.
Your Wedding Dress-Code Woes Are Solved Reformation is offering up to 40 percent off select items.
operators 3:16 p.m.
Adam Neumann, Vibes Landlord Marc Andreessen backs the WeWork founder’s second coming of … something?
cousin greg 3:01 p.m.
Nicholas Braun Has Gone Too Far Cousin Greg dressed up as beloved Friday Night Lights hunk Tim Riggins for W’s TV Portfolio.