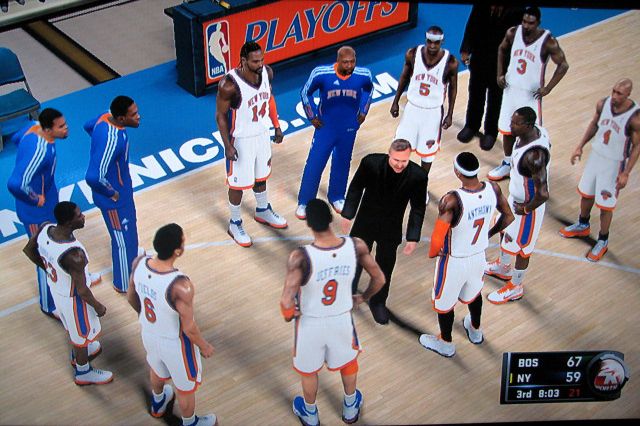 Honestly, we bought NBA 2K11 specifically for this post, so this one’s a long time coming. Unfortunately, our PlayStation3 has little faith in the Knicks to pull off the upset: The virtual Celtics took out the virtual Knicks in five games, wrapping up the series in the TD Banknorth Garden, or whatever the hell that place is called. Perhaps most depressingly, the Knicks lost both games at MSG, both by double digits, 105–93 in Game 3 and 111–100 in Game 4. The killer all series was Paul Pierce, who averaged 31.4 points per game. The Knicks had a chance to pull out Game 1, but Carmelo Anthony’s shot was blocked by Kevin Garnett as time expired, and the Knicks lost 100–99. Their only win was a Game 2 blowout in Boston, led by Carmelo’s 38 points. For what it’s worth, attempts to make video-game Andy Rautins save Princess Zelda all prove unsuccessful.

Our PS3 Likes the Celtics in Five
ouch 6:25 p.m.
Lena Headey Is Being Sued for a Cut Thor: Love and Thunder Role Her now-former agency alleges that she owes $500,000 for it.
coming soon 6:08 p.m.
Strangers, Andrew Scott’s New Movie With Paul Mescal, Sounds Hot Mescal’s character will “puncture the rhythm” of Scott’s “everyday life.”
crime 5:58 p.m.
A Mother Pushing a Stroller Was Shot and Killed in Manhattan Investigators say 20-year-old Azsia Johnson was shot at “very close range” while on the Upper East Side Wednesday night.
u.s. supreme court 5:50 p.m.
Supreme Court Agrees to Hear Case That Could Gut Voting Rights Odds are good the conservative majority will confirm total legislative control of redistricting and (more alarmingly) of all election rules.
off-season drama 5:44 p.m.
The Nets May Be Truly Screwed Now Kevin Durant reportedly wants out, leaving Kyrie Irving as possibly the only superstar standing next year.
let's go grandmas 5:10 p.m.
Miles Teller Should Be the Next James Bond, Says Miles Teller’s Grandma “Miles is very proud of his genetic connection to the British Isles.”
timelines 4:47 p.m.
The Complete History of Ezra Miller’s Controversial Career The woman Miller appeared to choke in a 2020 video from Iceland recounts the incident.
5 questions with... 4:43 p.m.
Saucy Santana on the Formula for Going Viral Santana makes viral videos in one take. He does so by staying true to himself.
best in class 4:30 p.m.
The 7 Very Best Smart Home-Gym Machines We cycled, lifted, rowed, and more to find out.
good one podcast 4:19 p.m.
Cristela Alonzo Needed a Decade to Process Greg Giraldo’s Advice  “You don’t have to listen to everybody’s notes, but if you respect them … maybe listen and see if it works with what you’re doing.”
the body politic 4:00 p.m.
The Abortion Stories We Didn’t Tell How decades of silence left us unprepared for the post-Roe fight.
By Rebecca Traister
no rest for the tickets 4:00 p.m.
New York Is Finally Making Ticket Prices More Transparent A bill that bans hidden fees and requires resellers to show original prices has been signed into law.
the classics got no respect today 3:35 p.m.
Glenn Frey Would Not Approve of This Nonsense A brawl broke out among VIP guests at an Eagles concert, during “Take It Easy.”
in a material world 3:20 p.m.
An Immaculate Collection of Details About Madonna’s Self-Written Biopic Starring Julia Garner as Madame X herself.
the industry 3:02 p.m.
Randall Emmett, Producer and Vanderpump Rules Ex, Faces Abuse, Fraud Allegations The king of the “geezer teasers” allegedly mistreated business partners, employees, and women (including ex-fiancé Lala Kent).
early and often 2:46 p.m.
Supreme Court Ends Term by Sabotaging Fight Against Climate Change The finale to this devastating term was a landmark decision by conservative justices limiting the EPA’s ability to regulate greenhouse-gas emissions.
crypto 2:41 p.m.
Oh Look, RadioShack Is Edgy on Twitter Now A marketing YouTuber is behind the zombie brand’s online resurgence, which is really a crypto gambit.
bpe 2:29 p.m.
The Songs of Girls5eva, Ranked They’re gonna be famous 5eva, but which song is No. 1?
explainer 2:20 p.m.
Trump’s Long Campaign to Steal the Presidency: A Timeline The insurrection wasn’t a one-day event. It was the culmination of a multifaceted, yearslong plot — and it isn’t over.
pride 2:00 p.m.
‘I’m Trying to Focus on the Joy’ Celebrating 20 years of Pride in St. Petersburg amid Florida’s anti-LGBTQ+ crusade.
By Ashley Dye