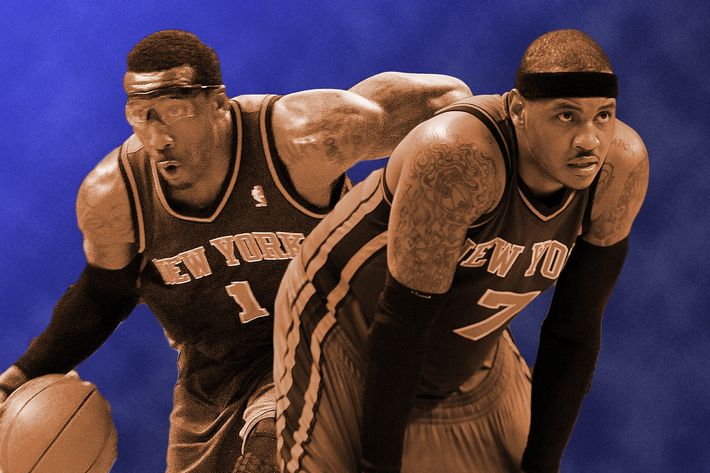 Let’s flash back to the very beginning of this season, the night of the Knicks’ first game: “We might not know where we’re all headed, but we know that, no matter what, it can’t be worse than what we’ve been through.” No one had any idea how many crazy turns the season would take back then, but now it’s just two days until the Knicks try to win their first playoff game in a decade — a DECADE! — and it’s still hard to believe the Knicks are actually in the playoffs.

From the get-go, the playoffs were the primary goal for Amar’e Stoudemire and coach Mike D’Antoni: After the Isiah years, getting there would feel like enough. But then came the winning streaks, the Paul Pierce “the Knicks are back!” comments, and, of course, the Carmelo Anthony trade. Somewhere it all got a little shifted: The Knicks’ success would now be judged on what they did in the playoffs, not that they made them at all.

We don’t accept this thesis: Getting here was the first step. Has everyone forgotten the last ten years of Knicks basketball? We have not. We remember watching all those wretched teams, holding out hope — at one point buying a Frank Williams jersey — and worrying that the franchise was doomed, that the Knicks would never matter again, that Isiah was going to light the Garden on fire. The Anuche Browne Sanders lawsuit, the great “I don’t even know what he’s doing” video, the Larry Brown fiasco … it was so, so horrible.

That’s not to say the Knicks don’t have a puncher’s chance against the Celtics. Boston is wobbly, cranky after the Kendrick Perkins trade and, all told, rather elderly. One wonders how the Knicks 1.0 version would have played  young, energetic gunners going crazy against an older team that is running out of steam. You can see how they might have worn the Celtics out. Shelden Williams is probably not wearing anybody out.

But still: If the Knicks can keep these games close — and these are the playoffs; close games happen every night — they have the most proven clutch scorer in the NBA, including Kobe, to give the ball to, a guy who has never missed the playoffs in his career. Carmelo Anthony is the takeaway from this season, and for the next fortnight, we’ll get a sense of just what he, and this team, is capable of.

The Knicks aren’t favored to win this series. They probably won’t. But they can make the Celtics sweat and fire up that old Garden playoff madness three times, send everyone into the off-season flying high rather than wondering what needs to be fixed. Perhaps the headline on a loss to the Celtics earlier this season is illustrative: “The Knicks Lose, But Of Course Win.” Getting back to the Garden for a Game 6 is a worthwhile goal. That would be terrific.

And who knows? If the Knicks can sneak out one of the two games in Boston, one on Sunday and one on Tuesday … that playoff opener next Friday will be as crazed as the Garden has been since the Ewing days. That’s the fun of being in the playoffs: All it takes is one hot night to change everything. The Knicks almost certainly won’t make it to the Eastern Conference Finals this year. But they might. Being in the playoffs means they might. We absolutely cannot wait.

So, the Playoffs Are Finally Here, Folks
vulture 10x10 8 mins ago
The Demogorgon Puzzle Don’t worry, these clues aren’t upside down.
sports 13 mins ago
Brittney Griner’s All-But-Predetermined Trial Begins The WNBA star is likely to be convicted and faces up to ten years in Russian prison.
the approval matrix 18 mins ago
Well, at Least Elmo Got Vaxxed Our guide to what’s highbrow, lowbrow, brilliant, and despicable.
design edit 19 mins ago
A Montauk Motel Renovation, Stadium Seating for Open Streets, and More Finds Plus a 1960s flyer for a whisper abortion consultation service run by clergy members.
life after roe 23 mins ago
Celebrities Respond to the Supreme Court’s Overturning of Roe v. Wade Including Viola Davis, Taylor Swift, and Ariana DeBose.
just checking in 27 mins ago
So What Is Rudy Giuliani Up to These Days? Trump’s former attorney has been keeping busy by dealing with January 6–related legal woes, making weird videos, and arguing with parade hecklers.
beyond bollywood 11:45 a.m.
India’s Zee5 Isn’t Perfect, But It Speaks the Languages The streamer may be a little messy, but it’s the best option to watch the subcontinent’s rich film output.
now streaming 11:44 a.m.
The 7 Best Movies and TV Shows to Watch and Stream July 4 Weekend There’s another murder in the building!
crop top no bra 11:36 a.m.
City Girls and Usher Invite Us to Cascade and the Cookout In the music video for their new summer bop, “Good Love.”
micro sales 11:27 a.m.
The Best Early Amazon Prime Day Deals (So Far) Get up to 50 percent off Amazon devices and in-house brands.
friday sales 11:21 a.m.
All of the Best July 4 Deals Including lots of Strategist-approved essentials.
this thing's incredible 11:02 a.m.
This Steamer Gives My Clothes a Dry-Cleaner-Quality Finish Every Time The tiny tool has a level of power seen only in industrial-grade machines.
rsvp yes 11:00 a.m.
Winning the Wedding-Season Marathon How guests with fully booked weekends are getting through it all. (Excel, mostly.)
By Emilia Petrarca
deal of the day 10:59 a.m.
This Breezy Everlane Dress Is 40 Percent Off It got our resident “Everlaneologist” both compliments and through a heat wave in Lisbon.
get well soon 10:55 a.m.
Bret Michaels Hospitalized, Cancels Poison Show in Nashville “I’m working on being back 100% very soon & hope you rocked hard with my friends Motley Leppard/Joan and Classless Act!!!”
the kardashians 10:30 a.m.
I Can’t Shut Up About ‘Krissing’ A TikTok trifecta: Kris Jenner, catchy audio, and being obnoxious.
By Mia Mercado
allegations 10:23 a.m.
All the Allegations Against Ezra Miller In the past few months, the actor has been arrested twice, repeatedly accused of physical assault, and accused of brainwashing a minor.
what to eat 10:19 a.m.
Someone Finally Turned Nathan’s Hot Dogs Into Ice Cream “Let the Dogs Out!” debuts at the Social just in time for the Fourth of July.
life after roe 10:14 a.m.
Are Social-Media Platforms Censoring Information About Abortion? Facebook and Instagram have been restricting and removing posts intended to help people seeking reproductive care.
our shopping cart 10:00 a.m.
The Strategist Haul: What the Editors Bought in June Lots of summer essentials — from sunscreen to Salomons.