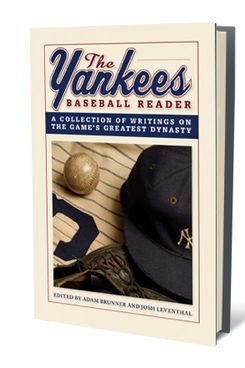 In The Yankees Baseball Reader, editors Adam Brunner and Josh Leventhal have compiled what Leventhal calls “the quintessential writings that define Yankee history,” with pieces by legends like Grantland Rice and Damon Runyon, as well as the work of contemporary scribes such as Joe Posnanski and Tom Verducci. We asked Leventhal to submit the editors’ picks for the five best pieces of Yankees writing of all time. “It’s always a little tricky to choose the five ‘best’ writings about the Yankees,” explains Leventhal, “since this rich tradition encompasses works that are great for their literary merit, those that are great in illuminating the team’s history, and those that are great for the impact they had, either on the game itself or on baseball literature. Our choices include a bit of each.” Those choices — all of which are excerpted in the anthology, out now — appear below, beginning with the best of the best.

1. “In Summer of ‘49, David Halberstam does a wonderful job of capturing the drama, passion, and excitement of that year’s pennant race between the Yankees and their bitter rivals, the Red Sox. He offers intimate depictions of some of baseball’s most iconic heroes — Joe DiMaggio, Yogi Berra, Ted Williams, and others — combining solid journalism with great storytelling. Even non-baseball fans would enjoy this one, thanks to Halberstam’s skills.”

2. “So much has been written about Babe Ruth over the years, but few baseball biographies rival Robert W. Creamer’s Babe: The Legend Comes to Life. This comprehensive portrait sorts through the mythology surrounding the larger-than-life figure to reveal the man behind the legend. Creamer resists an overly laudatory portrayal, and you’re sure to learn something new about Ruth and baseball history. (Jane Leavy’s recent work on Mickey Mantle, The Last Boy, is not to be ignored among the great baseball bios, either.)”

3. “Jim Bouton’s Ball Four was a groundbreaking book when it was first published in 1970, exposing some of baseball’s dirty secrets and naming names in the process. For all the controversy this tell-all memoir generated at the time, it might seem tame by today’s standards, but Bouton’s humor and unique personality make for an endlessly entertaining read.”

4. “I’ll admit to some nostalgic bias here, since this book deals with the era when I was a kid in New York and going to my first Yankee games, but Jonathan Mahler’s Ladies and Gentlemen, the Bronx Is Burning effectively captures the mayhem of the “Bronx Zoo” years while exploring the mayhem going on in the city at large. The antics of Billy Martin, George Steinbrenner, Reggie Jackson, and the rest are a fascinating sideshow to the serial killer, blackouts, financial crisis, and political intrigue of New York City in the mid to late seventies.”

5. “Spot-reporting is such an integral part of baseball’s literary tradition, and many of the game’s great scribes have written memorable pieces about specific moments in Yankee history. The opening line to Heywood Broun’s article on the 1923 World Series — “The Ruth is mighty and shall prevail” — is a true gem, but the one that stands out to us among all the rest is Shirley Povich’s piece on Don Larsen’s perfect game in the 1956 series. In fewer than 1,500 words, Povich captures the magnitude of this extraordinary accomplishment, offering both historical context and the drama of the moment.”

The Editors of The Yankees Baseball Reader on the Five Best Pieces of Yankees Writing Ever
my single is dropping 12:13 a.m.
Maren Morris and Zedd Meet in the Middle Once Again for ‘Make Me Say’ The new track is Zedd’s first time returning to a collaborator.
my single is dropping 12:08 a.m.
The Born Pink Era Begins Now Blackpink drop “Pink Venom,” their first comeback in nearly two years.
overnights Yesterday at 10:01 p.m.
Southern Charm Recap: Kiss and Yell It’s Charleston’s next-morning-brunch equivalent: everyone debriefing the previous night, hungover in their respective homes.
the law Yesterday at 10:01 p.m.
FBI Says Rust Gun Could Not Fire Without Trigger Pull Contradicting Alec Baldwin’s prior claims.
reflecting Yesterday at 9:26 p.m.
Trevor Noah Reflects on Viral Kanye West Daily Show Segment “All of us should have an opportunity at redemption.”
overnights Yesterday at 9:00 p.m.
Rap Sh!t Recap: #MiaCulpa Mia becomes social media’s main character.
want the world to kno-ow Yesterday at 6:32 p.m.
Tevin Campbell Is Ready to Come Out — Officially “Every person in the world isn’t straight. Get over it,” said the “Can We Talk” singer.
so random Yesterday at 6:29 p.m.
The Biggest Plot Twists in the Simon & Schuster Antitrust Trial The publishing world’s inner workings come to light.
damage control Yesterday at 5:57 p.m.
Brad Pitt’s Foundation Settles With Katrina Victims for $20.5 Million He and his Make it Right Foundation were sued for building poorly constructed homes after the hurricane.
celebrity Yesterday at 5:41 p.m.
We Support the Statement Thong Thank you to Doja Cat for championing this look.
early and often Yesterday at 5:22 p.m.
Transphobic Utah Parents Launch Witch Hunt Against Teen When their daughter lost to another girl, the parents asked the teen’s school to investigate whether she was transgender.
early and often Yesterday at 5:20 p.m.
Who Is This Succession-Themed Adam Laxalt Attack Ad For? The target appears to be Succession-obsessed media types like me, but there’s one problem: I can’t help but love every awful member of the Roy clan.
sexual misconduct Yesterday at 4:19 p.m.
Deshaun Watson Suspended Over Sexual-Misconduct Allegations Following an appeal, the quarterback was fined $5 million to be donated to organizations that prevent sexual assault.
gifts they might actually want Yesterday at 4:16 p.m.
The Best Gifts for 11-Year-Olds, According to Experts An adolescent psychotherapist, a librarian, toy experts, an actual sixth grader, and a mom share their picks.
operators Yesterday at 4:11 p.m.
When Is a Property Not a Home? Dr. Oz Knows. Maybe when it’s in New Jersey.
but why tho Yesterday at 4:03 p.m.
Kourtney Kardashian Really Loves a Bathroom Photo Shoot Her latest photo dump includes way too many urinals.
wait what is happening on tiktok? Yesterday at 4:00 p.m.
The Kids Are Stealing Cars on TikTok Now Meet the “Kia Boyz.”
media news media news Yesterday at 3:50 p.m.
Reliable Sources at CNN Say Reliable Sources Is Done CNN is saying good-bye to both the show and its host, Brian Stelter.
overnights Yesterday at 3:49 p.m.
American Horror Stories Recap: Reflection and Refraction Bloody Mary … Bloody Mary … Bloody ahh, we’re too scared to say it!
overnights Yesterday at 3:48 p.m.
Pretty Little Liars: Original Sin Recap: Knives Akimbo Our Final Girls are making some astounding leaps of logic.