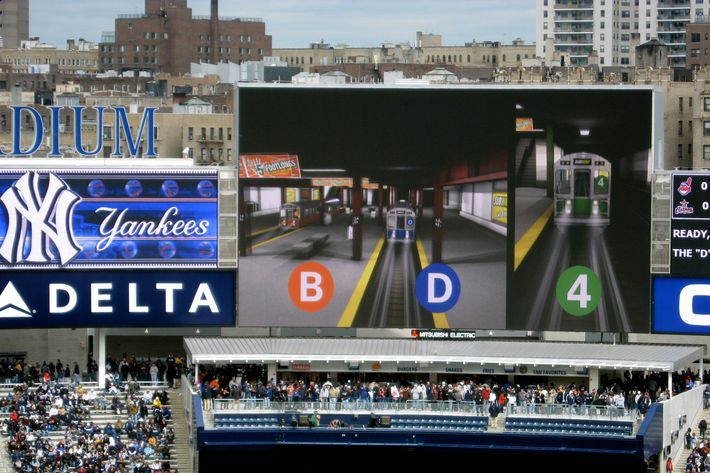 For the first five games of the season, the fourth-inning scoreboard subway race at Yankee Stadium featured not the B, D, and 4 trains, but trains called Road Gray, Midnight Blue, and Pinstripes. According to this morning’s Daily News, the MTA had allowed the team to use its train’s names as long as the segment wasn’t sponsored by another company. And so when the Yankees brought on Subway — as in the sandwich shop — as a sponsor, the MTA contacted the Yankees to discuss a potential change in their arrangement. It turns out, though, this wasn’t so much the case of the MTA looking to cash in, as much as it was the Yankees maybe assuming the MTA wanted to cash in.

Again, via this morning’s News:

The Yankees, presumably believing the MTA was looking for a piece of the sponsorship pie, never returned the call, opting instead to drop the names of the train lines in favor of the team-related colors.

“They assumed erroneously that we were looking to cash in on their sponsorship,” said an MTA official. “We weren’t.”

The MTA planned to propose a cost-free alternative, asking for a tag line at the end of the segment reading, “The Yankees and the MTA urge fans to take the train to Yankee Stadium.”

But fear not, subway aficianados: Word came this afternoon that the Yankees and the MTA have indeed reached an agreement, and that the race should be back to normal for tonight’s game against the Twins. Now, perhaps, they can get to addressing the real problem with the race: Why in the hell is the D train logo blue?

The Yankee Stadium Subway Race Can Now Return to Normal
summer preview 24 mins ago
17 Books We Can’t Wait to Read This Summer With new releases from Akwaeke Emezi, Ottessa Moshfegh, Mecca Jamilah Sullivan, Mohsin Hamid, and more.
By
cinephile tea 6:17 p.m.
Viggo Mortensen Accuses Pedro Almodóvar of Being Bitter, Almodóvar Responds What is Cannes Film Festival without someone starting drama for no reason.
what we know 5:47 p.m.
Texas Officials Acknowledge Botched Police Response to School Shooting The local police chief in charge delayed confronting the gunman — while kids trapped inside the classroom repeatedly called 911 asking for help.
survey says 5:31 p.m.
What Do Comedians Think of (the Non-Joke Parts of) Stand-up Specials? Here are insights from 39 of them.
By Hershal Pandya
explainers 5:27 p.m.
The Bullying Allegations at the Center of HYBE’s Next Big K-Pop Group, Explained After Korean forums accused Kim Garam of bullying, the internet was aflame.
early and often 5:20 p.m.
Will Trump Ruin Georgia Republicans Out of Spite? Trump really dislikes Governor Brian Kemp, who thwarted his primary purge attempt. But Georgia Republicans want a united front against Stacey Abrams.
overnights 4:12 p.m.
Stranger Things Recap: The Shire Is on Fire We (mostly) love Steve getting his big hero moment in the penultimate episode of Volume 1.
follow friday 4:06 p.m.
Michael Bonfiglio Wants to Tell You a Story We chatted with the director about the art of the stand-up comedy special — and, naturally, hummingbirds.
burnout 4:00 p.m.
When to Just Quit Already How to figure out it’s time to move on — and be okay with it.
now streaming 4:00 p.m.
What’s Leaving Netflix: June 2022 Lady Bird, Criminal Minds, My Fair Lady, and more.
why this looks like that 3:28 p.m.
Designer Minjae Kim Translated His Mom’s Paintings Into Chairs “I sent her a photo of the chair. She was like, ‘Oh, it’s my painting.’”
overnights 2:47 p.m.
Obi-Wan Kenobi Recap: Second Chances What feels a bit like Taken in space pivots to “John Wick: Chapter 2 in space” territory — and it works!
uvalde 2:40 p.m.
What We Know About the Police Response to the Uvalde Shooting Authorities have now said that not breaching the classroom the shooter occupied for more than an hour was “the wrong decision.”
obsessive tester 2:24 p.m.
I’m On the Hunt for the Best Sunscreens Without a White Cast These are my current favorites.
gone sale-ing 2:10 p.m.
I Didn’t Know Luxury Until I Got These Linen Sheets And they are currently 15 percent off.
best in class 2:10 p.m.
The Very Best Women’s Loungewear Find your Entireworld replacement here.
q&a 2:00 p.m.
Is Somewhere Good the Future of Social Media? We spoke to Annika Hansteen-Izora, the designer of the app, about slowing down and truly connecting.
still learning 1:58 p.m.
Isaiah Rashad Comes Out as ‘Sexually Fluid’ in First Interview About Sex Tape “I’m not in full control of, when I walk into a room, of who I’m attracted to,” he told Joe Budden.
as told to 1:48 p.m.
How Teachers Talked About Uvalde With Their Students After the Texas school shooting, educators share their fears and frustrations.
By Bindu Bansinath
texas school shooting 1:48 p.m.
We Already Turned Schools Into Fortresses Kids are dying anyway.