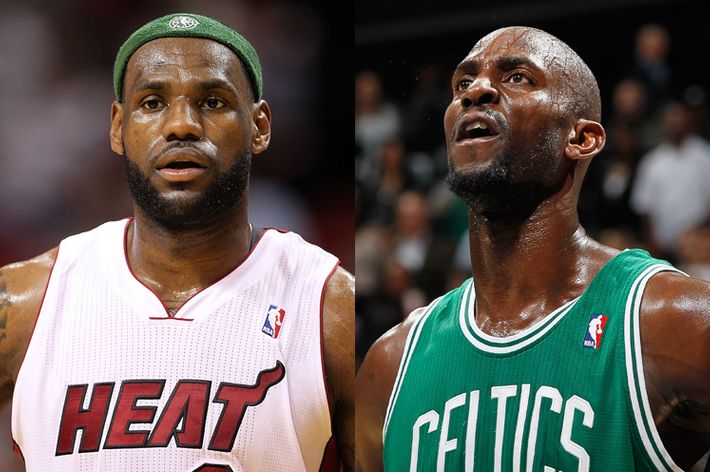 Last night, Derrick Rose nailed down his MVP award, if he hadn’t already, by leading his Chicago Bulls to a 97–81 pasting of the Boston Celtics. It put a final punctuation mark on a fact that has been clear for a while: The Bulls are far and away the best team in the Eastern Conference and might be the best team in the NBA. That’s quite a turnaround, and it’s worth remembering that three years ago, the Bulls were being lambasted for not being able to hire Mike D’Antoni. Lots has changed in the last triad.

But enough about the Bulls: The Knicks won’t run into them in the playoffs unless both teams make the Eastern Conference Finals, and if that happens, we’ll be too busy screaming about double rainbows to type many coherent sentences anyway. (The Bulls are the Pacers’ problem right now.) Instead, let’s focus on the two teams the Knicks have a chance to play in the first round of the playoffs, which begin in a week: the Boston Celtics and the Miami Heat.

Those two teams are tied for the No. 2 seed in the Eastern Conference, and if they stay tied, the Celtics win the tiebreaker, thanks to their three regular season wins over the Heat. Meanwhile, the Knicks are a half-game up on the 76ers for the No. 6 seed, though they have a far more difficult schedule in the next week. If they end up tied, though, if the Knicks can beat the Nets tonight, they’ll earn the tiebreaker over Philly thanks to a better conference record.

So, who should the Knicks want to play in the first round? (We’ll ignore, for the time being, that, were the Knicks to win their first-round series, they’d likely play the other team next: A first-round series win would be enough to justify everything that has happened for the last three seasons.) Let’s take a look at each team, and how the Knicks stack up.

Boston Celtics
Knicks record vs. Boston in 2010–11: 0–3 (with one more game to go in Boston on Wednesday).
Playoff history vs. Boston over the last 25 years: 1988, lost to Boston 3–1 in first round; 1990, beat Boston 3–1 in first round.
Advantages: Against a team that defends as well as the Celtics do, you need guys who can score even with guys draped all over them. The Knicks have two of these gentlemen in Carmelo Anthony and Amar’e Stoudemire. Also, without Kendrick Perkins and (probably) Shaquille O’Neal, the Knicks’ lack of muscle underneath is less damaging.
Disadvantages: The Celtics are loaded with playoff experience, hungry to make one last stand (hungrier than the Knicks seem, anyway) and have had the Knicks’ number for a few years now. And they’re still tougher than the Knicks, by a long shot. Also, do you think the Knicks have anyone to match Kevin Garnett’s playoff intensity? He might eat poor Anthony Carter.
Best-case scenario: One of the Celtics’ “big three” is gimpy, and Rajon Rando continues to refuse to shoot. Carmelo drains two game-winners in the final seconds.
Worst-case scenario: The Celtics win two easy games at home and then, five minutes into Game 3 at the Garden, Garnett starts a brawl that ends up with Amar’e and Carmelo suspended one game for coming off the bench. The Knicks are swept, and Anthony Carter is eaten.

Miami Heat
Knicks record vs. Miami in 2010–11: 2–2.
Playoff history vs. Miami over the last 25 years: 1997, lost to Miami 4–3 in conference finals; 1998, beat Miami 3–2 in first round; 1999, beat Miami 3–2 in first round; 2000, beat Miami 4–3 in conference semifinals.
Advantages: The Heat are as weak in the paint as the Knicks are, except New York has Amar’e Stoudemire and Miami has Chris Bosh. (That’s an advantage.) LeBron James is going to have everyone staring at him, expecting him to win every game by himself, something he has yet to show he can do in the postseason. Every basketball fan on earth will be cheering for the Knicks. That includes probably a third of fans during games in Miami; expect Amar’e “MVP” chants in American Airlines Arena.
Disadvantages: They have two of the best five players in the world who recognize a first-round exit at the hands of the Knicks would be the blackest mark on either of their careers.
Best-case scenario: The Knicks sneak out a game in Miami, heading back to a frenzied Madison Square Garden tied 1–1. If that happens, no one will remember anything that happened in the regular season. The Knicks win two out of three at home, and the Heat, terrified, have a Cavs-in-Game-6-vs.-Boston collapse to let the Knicks clinch in six.
Worst-case scenario: The Heat wake up and play the dominating basketball everyone has been waiting for them to do all season. The Knicks are swept, and the NBA chattering classes spend the summer talking about how pale an imitation of the Heat that the Knicks really are.

Verdict: We think the Knicks stack up better against the Heat, in almost every way. Plus: It’d be nice to have the whole world cheering for the Knicks for once, right?

Would the Knicks Rather Play the Celtics or the Heat?
celebrity 8 mins ago
Florence Pugh and Will Poulter Sure Seem Friendly They were recently spotted “hanging out” on a beach in Ibiza.
life after roe 8 mins ago
Nancy Pelosi Communion Ban Is a Challenge to Pope Francis The Vatican opposes the weaponization of Communion and stopped bishops from barring President Biden. Will Francis intervene on Pelosi’s behalf?
the law 11 mins ago
Gunna Denied Bond for Gang Charge, Trial Set for January The rapper’s attorneys denied he would be a risk for witness intimidation.
gift guide 18 mins ago
21 Father’s Day Gifts for the Fancy Man Fancy gifts for fancy dads.
street style 24 mins ago
People-Watching at Frieze New York See the best street style from the art fair.
By Maridelis Morales Rosado
just checking in 4:49 p.m.
So What Is Rudy Giuliani Up to These Days? Trump’s former attorney has been keeping busy by dealing with January 6–related legal woes, making weird videos, and arguing with parade hecklers.
plagued 4:09 p.m.
The COVID Vaccine News Many Parents Have Been Waiting For Pfizer has finally filed for FDA approval for a three-dose COVID vaccine for kids under the age of 5.
fashion 3:08 p.m.
Balenciaga Took Over New York City. Here Is What Happened. For the first time in nearly 20 years, the French fashion house brought its sharp tailoring to the city.
celebrity 3:05 p.m.
Please Watch Kendall Jenner Try to Walk Up These Stairs The dress she wore to the Kravis wedding made it difficult to move.
i tried it 3:00 p.m.
Can Golden Hour Fix Your Brain? For a week, I attempted to find out.
endings 3:00 p.m.
The Empty Symbolism of Men’s Ending Alex Garland’s Men is laden with symbolism, much of it provocative and highly gendered. But what does it all add up to?
By Katie Rife
not a professional. just crazy 2:54 p.m.
My Favorite Under-$10 Lipsticks Buy multiples. Store them everywhere.
21 questions 2:26 p.m.
Coco Fusco’s Best View of the City Was From a Birthday Boat Ride The artist answers Curbed’s “21 Questions.”
manchester's finest 2:13 p.m.
Liam Gallagher Hops Aboard His Own ‘Magic Bus’ His maraca-infused track, “World’s in Need,” was inspired by the Who.
lawsuits 2:03 p.m.
Bill Cosby Is Back on Trial In 2014, Judy Huth filed a civil suit against the comedian, alleging child sex abuse. Now, the case is going to court.
apologies 1:50 p.m.
Courtney Love Regrets Weighing in on Depp v. Heard “I want nothing to do with contributing more online bullying,” she wrote.
sales sales sales 1:50 p.m.
From NuFace to Ilia, Here’s Everything Worth Buying at the Dermstore Summer Sale Kick off the season with a medicine-cabinet refresh.
testing testing 1:30 p.m.
The Best Mattresses You Can Buy Online, As Tested by Strategist Editors Our editors and writers slept on each of these for at least one week.
By The Editors
bidding wars 1:26 p.m.
Brooklyn Heights Penthouse Shatters Cuck-Money Ceiling Don’t volunteer to pay $10,000 more in rent.
fashion 1:03 p.m.
At Balenciaga, Gloss Kapitale Demna uses money and kinky sex to sell a perfectly good suit.
By Cathy Horyn