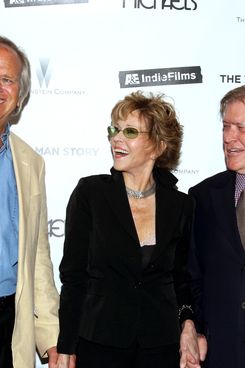 In 2009, the commissioners of every major sports league  Bud Selig, David Stern, and Roger Goodell let the NHL’s Gary Bettman tag along  and Muhammad Ali presented Dick Ebersol with a Lifetime Achievement Award Emmy. Like Batman, Superman and the Flash, these guys rarely get together, and when they do, it’s usually not to honor someone from a field as intrusive and low-rent as media. But that was the power of Dick Ebersol. The ring-kissing was a public acknowledgment of the flamboyant, free-spending executive who helped invent modern sports in the nineties and made their leagues lots of money. It also foreshadowed his demise: In today’s more corporate sports world, no one man is bigger than the company.

Considering that Ebersol was just promoting NBC’s prime-time lineup at Monday’s upfronts, today’s news that he has resigned from the network is shocking. He ran NBC’s sports arm for more than twenty years, with a hand in everything from the Olympics to NFL’s “Sunday Night Football” to “Saturday Night Live.” Above all, he served as a model for every other TV sports executive, even as they were all trying to defeat him. ESPN’s ascendance over the last ten years is a direct copy of Ebersol’s strategy at NBC: Spend exorbitantly for big-ticket items, use those items as your tentpole programming, and watch all boats rise in their wake.

It’s possible that ESPN’s rise may have helped lead to his departure. The four-letter network  which is surely happy that this huge story might distract from that upcoming big book o’ scandal, which happens to feature some juicy trash talk from Ebersol  has been salivating over the Olympics for years, forcing NBC to pay through the nose to hang onto the broadcast rights. But the Vancouver Olympics lost more than $223 million for NBC right after Comcast’s purchase of the network, and many reports have speculated that those buttoned-down Kabletown folks weren’t particularly happy about that. With the rights for the 2014 Russia Olympics and the 2016 Brazil Olympics up for bid just next month, it is not a stretch to think that the penny-pinchers in Philadelphia might not have been too ecstatic  or at least not nearly as ecstatic as Ebersol  to bid against ESPN again. It’s now much more likely that you’ll see Chris Berman trying to come up with wacky nicknames for Scandinavian lugers in three years. Yay.

It’s also possible that Ebersol’s egocentric management style  for example, he was eager to brawl during the Leno mess last year, calling Conan O’Brien “gutless” and an “astounding failure”  didn’t mesh with the more low-key Comcast ethos. “My guess is they were on to him,” said one former NBC staffer today. In a sense, this was inevitable: Ebersol changed sports by taking big risks  like overpaying for Sunday Night Football to the tune of $600 million in 2005, and getting higher ratings than anyone predicted  almost all of which ultimately paid off. (The XFL being a throbbing, but still entertaining, exception.) That doesn’t work for network television now. NBC is the Sheinhardt Wig Company, a small part of a much larger deal; the real players are ESPN. (Strong arguments have been made that Ebersol has lost his touch anyway.)

In a way, Ebersol’s departure is a relief: Such an industry giant shouldn’t have to spend his days going through line-by-line audits of the catering budgets for November NHL regular-season games on Versus. Nobody wants to see Jack Donaghy reduced to another cog in a faceless corporation. Ebersol was a rock star sports executive  the rock-star sports executive  and that’s not what Comcast, or sports networks in general, value anymore. He’s still big, he’d surely tell you if he could: It’s the TV sports that got small.

Dick Ebersol Is a Casualty of Kabletown
shootings Yesterday at 11:55 p.m.
A$AP Rocky Charged With Felony Assault with a Firearm In connection to a Hollywood shooting in November of last year.
spoilers Yesterday at 11:17 p.m.
Let’s Talk About the End of Better Call Saul As it turns out, the Breaking Bad prequel/sequel is also TV’s best time-travel show.
oz-ish Yesterday at 11:04 p.m.
Kenya Barris Is Off to See the (Reimagined) Wizard of Oz The Black-ish creator will write and direct a new take on the 1939 musical movie.
overnights Yesterday at 10:00 p.m.
Industry Recap: Execute This week, Harper and Jesse star in a high-stakes comedy of errors in Wales.
overnights Yesterday at 9:30 p.m.
Below Deck Mediterranean Recap: Courtney’s Ready to Twerk After the drama from last week, Natasha goes AWOL and gets on Kyle and Natalya’s nerves.
birthday presents Yesterday at 8:34 p.m.
Nipsey Hussle Has Been Posthumously Honored With a Hollywood Walk of Fame Star The ceremony took place on what would’ve been his 37th birthday.
early and often Yesterday at 6:57 p.m.
Los Angeles D.A. Avoids Chesa Boudin’s Fate A like-minded recall effort targeting district attorney George Gascon, backed by the police and other prosecutors, has fallen short.
tweet tweet Yesterday at 6:42 p.m.
Viola Davis Will Be the Head Honcho of the Hunger Games Prequel She’ll star in The Ballad of Songbirds and Snakes as Dr. Volumnia Gaul.
breakups Yesterday at 6:27 p.m.
Michelle Branch Files to Divorce the Black Keys’ Patrick Carney She took the step a day after announcing their split online.
oscars 1973 Yesterday at 6:17 p.m.
The Academy Finally Apologizes to Sacheen Littlefeather for Mistreatment The Indigenous activist was booed at the 1973 Oscars for protesting Native American mistreatment.
what we know Yesterday at 6:15 p.m.
Salman Rushdie Is on the ‘Road to Recovery’ Following Gruesome Attack The acclaimed author was grievously wounded and remains hospitalized but was taken off a ventilator and again able to speak on Saturday.
respect the classics Yesterday at 5:50 p.m.
Everyone Thank South Park for Reuniting Rush Geddy!! Alex!! Emotions!!
celebrity weddings Yesterday at 5:44 p.m.
Bennifer Is Getting Married (Again) The follow-up party to their small Vegas wedding is happening this weekend in Georgia.
coming soon Yesterday at 5:27 p.m.
Succumb to The Lord of the Rings: The Rings of Power Daddy Bezos wants your sweet, sweet attention.
you know nothing Yesterday at 5:22 p.m.
The Game of Thrones Prequel House of the Dragon Is Here at Last All the lore, just in time for its August 21 premiere.
celebrity Yesterday at 5:13 p.m.
Bella Hadid Isn’t Afraid to Speak Out About Palestine Anymore The model said many companies have stopped working with her following her advocacy.
micro sales Yesterday at 5:00 p.m.
There’s a $12 Turtleneck and a $10 Tank on Sale at Everlane Plus lots of other stuff up to 76 percent off.
hairy situations Yesterday at 5:00 p.m.
The Best Dandruff Shampoos for Every Kind of Hair From curls to color-treated.
By Asia Milia Ware, The Cut, and Chinea Rodriguez
tremendous content Yesterday at 4:40 p.m.
11 Questions About the Dr. Oz Crudités Video Paying too much to dip raw asparagus in salsa may not be a relatable problem for Pennsylvania voters.
the city politic Yesterday at 4:22 p.m.
Liz Holtzman on Why Guts and Expertise Matter More Than Age The 81-year-old former congresswoman says she feels called to get back in the fight.