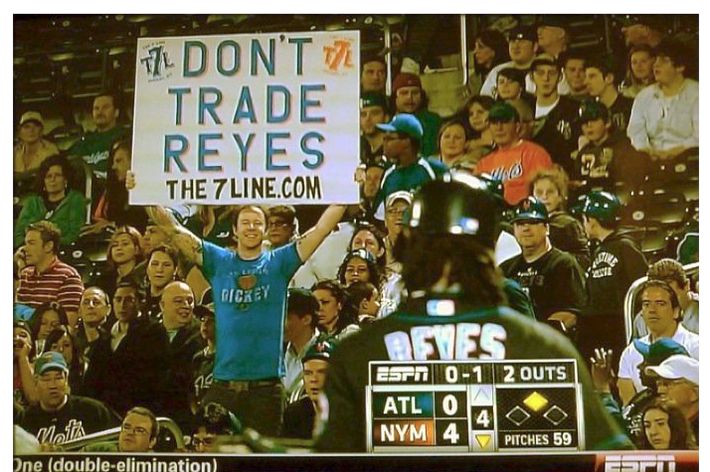 What you see above is a screen shot from last night’s Mets win over the Braves. Shortly after that “Don’t Trade Reyes” sign had its moment of national exposure, the man holding it was asked to leave Citi Field. Today, he’s telling his story, both on WFAN and on his blog.

His ordeal, in a nutshell: He’d brought the sign with him on Friday without incident — it was even shown and discussed on SNY, he says — but last night, after he displayed the sign during Jose Reyes’s fourth-inning at-bat, he was told by a security guard that he couldn’t hold it up during play. This makes sense — doing so is not only inconsiderate, it violates the team’s stated rules about banners — so after the at-bat ended, he held it up again and was told that he couldn’t display it because it contained a website address. (Rules also prohibit commercial messages.)

As he tells it today, the fan, Darren Meenan, also agreed that this made sense. But here’s what happened next:

I decided to leave the section on my own and walk back to my original spot. I agreed that I wouldn’t show the sign anymore. They didn’t kick me out right off the bat. I folded up my sign and while walking out (while fans booed of course.. they wanted me there) and people around asked how to contact me. I gave out about 10 business cards and that is what set off security even more. That is now soliciting I guess.

The guard asked to see my ticket. I did in fact have one for that section. He then confiscated the ticket and asked me to leave on my own or leave in cuffs. I asked on what charge and he said “now you are trespassing, you don’t have a ticket”. Real classy.

The thing is, Meenan technically violated Citi Field rules. Legally, security was probably within their rights to do what they did. But it’s not exactly a step in the right direction for fan relations. (Handing out business cards with the URL of a Mets blog is also hardly the worst thing one can do in a baseball stadium. Maybe there’s more to the story, but a warning about that seems like it would have sufficed.) Perhaps it’s not the message on the sign that got Meenan kicked out, but you’d think security would be a little sensitive here. It’s every franchise’s dream not only to have players who inspire such strong feelings, but to have fans who care enough to start such a movement to keep a player in town. That’s the type of fan the Mets should be catering to, not finding reasons to eject. The lesson to be learned here: If you’re going to express your position on Jose Reyes, make sure you follow each and every one of Citi Field’s regulations.

If You’re Going to Display a ‘Don’t Trade Reyes’ Sign, Make Sure It Meets Citi Field Regulations
trial run 52 seconds ago
Josh Duggar Sentenced to 12 Years in Prison He also has to pay a $50,100 fine.
my single is dropping 26 mins ago
Sky Ferreira Didn’t Forget, Drops First Single in More Than 3 Years “Don’t Forget” is the latest offering from her long-delayed second album, Masochism.
a long talk 28 mins ago
Sky Ferreira Has a Lot More to Say About her new single “Don’t Forget,” her delayed second album, and still feeling restricted.
By Justin Curto
protests 5:58 p.m.
Ukrainian Filmmakers at Cannes Protested Censorship of Russian ‘Genocide’ The team behind Butterfly Vision played air-raid sirens during the demonstration.
gone sale-ing 5:28 p.m.
Here’s My Designer-Sunglasses Shopping Secret I never pay full price.
lawsuits 5:18 p.m.
Kate Moss Says Johnny Depp Never Pushed Her Down a Staircase Testifying in Heard v. Depp, the model denied the rumor.
what we know 5:12 p.m.
Gunman Kills at Least 19 Children and Two Teachers at Texas Elementary School The deadliest massacre of its kind since Sandy Hook.
uvalde 4:47 p.m.
The Children Are No Longer Our Future So now what?
By Brittney Cooper
father's day 2022 4:39 p.m.
The Best Gift Sets on Amazon for Every Type of Dad This Father’s Day Whether he’s a home-brewing dad or a golf dad.
don't dillydally 4:36 p.m.
11 Things That’ll Almost Definitely Sell Out: From Uniqlo to Quiksilver Including Uniqlo’s latest designer collab, essentials for a summer cookout, and Converse adorned with the gang from Peanuts.
the national interest 4:23 p.m.
The Conservative Playbook for Deflecting Anger After Mass Shootings Ignoring the obvious connection between gun deaths and lax gun laws in three easy steps.
this month in comedy podcasts 4:18 p.m.
This Month in Comedy Podcasts: Getting Older With Marina Franklin and Bevy Smith Rounding up our favorite comedy podcast episodes of the month.
viewing guide 4:03 p.m.
The Best and Worst of Love, Death & Robots Volume 3 Netflix’s experimental animated series is back, serving up its signature blend of sci-fi, horror, and comedy.
i tried it 4:00 p.m.
Okay, Fine, Journaling Kind of Works After years of carrying around an empty notebook, I finally forced myself to write down my weirdest, dumbest thoughts.
sales sales sales 3:49 p.m.
The Very Best Deals From Nordstrom’s Half-Yearly Sale Including our favorite Marshall portable speaker and some under-$100 UGG slippers.
britney's peers 3:02 p.m.
Idol Britney Spears Met Up With Sam Levinson and the Weeknd Who just so happen to be co-creators of HBO’s The Idol.
chat room 3:00 p.m.
Steve Earle on No More Tribute Albums and His Complicated Nashville Legacy “There are a lot of people in Nashville that blame what they’re doing on me. Some complain I’m the reason the drums are too fucking loud.”
action item 2:45 p.m.
How to Help the Uvalde Community From supporting Robb Elementary School families to pressing for gun-control legislation.
cannes 2022 2:41 p.m.
Both the Kids From Squid and the Whale Brought Coming-of-Age Tales to Cannes Seventeen years after The Squid and the Whale, both of the children from that film have brought their directorial debuts to Cannes.
By Nate Jones
street view 2:36 p.m.
What’s a Bicycle For? A new book digs into our ambivalent relationship with life on two wheels.