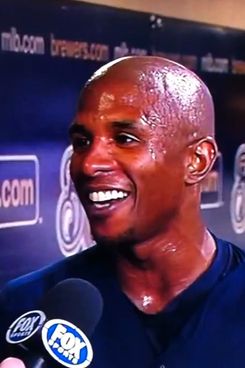 There’s a post about Jose Reyes on the Daily News Mets blog today, in which Reyes talks about how he used to be “edgy” when he batted late in games: He’d want a big hit so bad, the story goes, he’d swing at pitches he should have taken. But he says he’s calmer this year, crediting both his good health and hitting coach Dave Hudgens, who’s taught him to lay off high strikes and pitches in the dirt. So that’s one way to develop a good approach at the plate, even in, say, a tense situation in the ninth inning of a game. Another, meanwhile, would be to not even know it’s the ninth inning — which is what happened with Milwaukee’s Nyjer Morgan last night.

Morgan’s double off Dale Thayer plated the winning run for Milwaukee against the Mets last night — but Morgan didn’t know he’d ended the game: He thought it was only the eighth inning. (Perhaps someone should introduce Morgan to Nick Folk; they could trade I-didn’t-know-I’d-won-the-game stories.) Anyway, from the Milwaukee Journal Sentinel:

“It’s probably a good thing that I thought it was the bottom of the eighth because I didn’t feel as much pressure,” said Morgan. “I guess it worked out as a good thing for us.

“I got to second and I looked back and saw the boys running out. That shows what we have here is something special. We didn’t give up. We picked our pitchers up just like they’re going to pick us up.”

The Mets had scored five times in the eighth to turn a 2–1 deficit into a 6–2 lead. But the bullpen couldn’t hold it: Milwaukee answered back with four runs in the bottom of that inning before Morgan won the game in the ninth.

Here, by the way, is Morgan’s post-game TV interview. You really must watch it:

Nyjer Morgan Didn’t Know His Double Had Beaten the Mets Last Night
sports 8 mins ago
Brittney Griner Seen in Handcuffs in Russian Court The WNBA star’s trial for allegedly possessing hashish oil begins July 1. If convicted, she could face ten years in prison.
budgeting 1:00 p.m.
This Wedding Season Is Going to Cost You Budgeting for someone else’s big day.
By Emma Turetsky
life after roe 12:44 p.m.
Why the Post-Roe GOP Will Only Get More Radical Decades after partnering with the anti-abortion movement, the Republican Party has finally delivered. But ending Roe is just the start.
politics 12:29 p.m.
Rudy Goes on Media Blitz After Slap on Back The man who confronted Giuliani on Sunday has been arrested for second-degree assault.
why? 12:20 p.m.
Alec Baldwin Has Taken It Upon Himself to Interview Woody Allen This seems like a bad idea, but carry on.
what to eat 12:10 p.m.
A Lovely New Salad That’s Also Pure Garbage At Patti Ann’s, the garbage salad takes equal inspiration from Chicago steakhouses and French fine dining.
By Alan Sytsma
celebrity 12:01 p.m.
Billie Joe Armstrong ‘Renouncing’ U.S. Citizenship Over Abortion Ruling “I’m f- - -ing coming here,” he told a crowd in London.
ted! 12:00 p.m.
An Interview With Stranger Things’ Most Oblivious Dad “If you remember Who Framed Roger Rabbit, the vixen, Jessica Rabbit, is like, ‘I’m not bad; I’m just drawn that way.’ Ted is like that.”
vulture 10x10 12:00 p.m.
The Trophy Puzzle 31-Across, Four Letters: Number of Oscars for Glenn Close, inexplicably.
brooding 12:00 p.m.
What Even Is a Resilient Child? An unexpected Instagram exchange made me consider how growing up with social media affects kids.
bet awards 11:27 a.m.
Jazmine Sullivan Wants Men to Talk About Abortion Too Presenters at the BET Awards were outspoken about the loss of Roe — but the men were noticeably silent.
overnights 10:46 a.m.
90 Day Fiancé Recap: Free Bini, Kobe, and Shaeeda If the producers wanted to diversify the villains and victims they feature on this show, they’re doing a great job.
extremely online 10:26 a.m.
A Timeline of the David Dobrik Allegations and Controversies Jeff Wittek threatens legal action, two years after the accident that nearly blinded him.
By Florence O'Connor and Zoe Haylock
the saul goodman show 10:09 a.m.
Carol Burnett to Guest Star on Better Call Saul Bob Odenkirk had better be tugging on that ear of his.
comedy review 10:00 a.m.
Welcome Back to John Early and Kate Berlant’s Absurd Duet Would It Kill You to Laugh? is a monument to surrealist queer pettiness, standing high atop a foundation of incredible comedic harmony.
By Kathryn VanArendonk
protests 9:43 a.m.
Jodie Sweetin Pushed by Police at L.A. Abortion-Rights Protest, Responds “This will not deter us; we will continue fighting for our rights.”
q+a 9:00 a.m.
Robin S. Is Riding the Wave of Beyoncé’s ‘Break My Soul’ “‘Show Me Love’ is my legacy. And Beyoncé thought of me enough to be a part of my legacy.”
urgent reconsideration 8:00 a.m.
Atlanta Season Three Was a Bad Trip After a two-year break, Donald Glover’s FX series returned unsure of what it wanted to say. Four Vulture writers and critics try to make sense of it.
how i get it done 7:00 a.m.
How Pro Wrestler and WWE Superstar Bianca Belair Gets It Done And a message to the Rock: You need to put her in your next movie.
By Jane Starr Drinkard
#metoo 7:00 a.m.
The First Female Referee in WWE Says Vince McMahon Raped Her Rita Chatterton does not want to be forgotten.