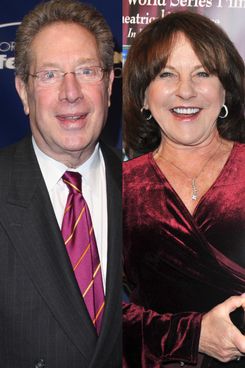 Earlier this month, Ralph Gardner Jr. of The Wall Street Journal wrote a complimentary piece about John Sterling and Suzyn Waldman, praising them for their conversational style and calling them his “favorite announcers.” (That column, by the way, is not to be confused with the paper’s piece about Sterling’s expiring contract from last month — the one in which we learned that one of Sterling’s since-retired home-run catchphrases was a reference to a Black Panther’s rallying cry.) But based on the feedback to that piece — today he ran some of the letters he received in response to the column — Sterling and Waldman are not the favorite announcers of many of his readers. Not even close, actually.

Here’s one of the letters:

And here’s one from Gerard Meagher, a regular reader of Gardner’s column and the owner of the Old Town bar on 18th Street:

So duly noted: Call Sterling and Waldman your favorite announcers, and all hell breaks loose. But, you know what? We don’t think Sterling and Waldman are that bad. Sterling, in particular, isn’t as bad as he’s often characterized. Yes, Sterling’s catchphrases are silly and forced — but we’d be lying if we said we didn’t giggle while rolling our eyes. And yes, he’s drawn out his “Yankees win” call to absurd lengths — listen to how short it was back when David Wells pitched his perfect game in 1998 — but he’s hardly the first announcer with a calling card. And though neither is one to embrace a statistic any more advanced than on-base percentage, he and Waldman do know their baseball, having been around the Yankees for decades now. If nothing else, the two have chemistry on the air.

For our money, the most infuriating thing about Sterling — by a wide margin, actually — is his insistence on calling plays before the umpire has made his signal. We’d rather every call be accurate and come a quarter-second later than hear something like, “Lined like a bullet, it’s a fair ball! No, it’s foul!” ever again.

We wouldn’t call Sterling and Waldman our favorite announcers, and to be sure, no one’s going to confuse Sterling for Vin Scully. But we wouldn’t mind if their contracts were renewed. (Plus, let’s be honest: Goofing on Sterling is fun in its own right. We’d miss stuff like this, or this, or this.) And anyway, that Jesus Montero home-run call — such a great name for Sterling to work with! — isn’t going to write itself.

Wall Street Journal Readers Are No Fans of John Sterling and Suzyn Waldman
bound 2 (remix) Yesterday at 11:44 p.m.
Ye Thanks/Blames Diddy for His ‘Wife Choices’ “Thanks for that, Puff.”
comedy writing Yesterday at 11:30 p.m.
For Kevin Iso, Interesting Beats Funny Talking Flatbush Misdemeanors and That Damn Michael Che with the comedian and writer.
overnights Yesterday at 11:06 p.m.
P-Valley Recap: The Real Househoes of Chucalissa The Pynk is an absolute mess and the future of the club is in question.
i'm up! Yesterday at 10:44 p.m.
Doechii Snatched Her Own Wig at the BET Awards She came, she served, she conquered.
my single is dropping Yesterday at 10:07 p.m.
Cardi B Announces New Single During BET Awards While not being physically present at them.
overnights Yesterday at 10:00 p.m.
Westworld Season-Premiere Recap: Christina’s World It’s several years into the new world and everyone has made news lives for themselves — but nothing good lasts long in Westworld.
overnights Yesterday at 9:30 p.m.
The Real Housewives of Atlanta Recap: Drop It With Drew & Co. An investigation into Drew’s weight-loss program.
murked on his own beats Yesterday at 9:20 p.m.
Jack Harlow Probably Knows Who Brandy Is Now The rapper performed with the R&B legend and Lil Wayne at the 2022 BET Awards.
overnights Yesterday at 9:00 p.m.
Becoming Elizabeth Recap: Elizabeth Learns a Lesson Catherine Parr, we love you.
weekly crossword Yesterday at 8:55 p.m.
The New York Crossword: ‘Aren’t You Sweet’ 116-Across: Whistling weather.
astrology Yesterday at 8:30 p.m.
Madame Clairevoyant: Horoscopes for the Week of June 27 Early Tuesday morning, Neptune retrograde begins. For better or for worse, you’ll have to reckon with the world as it actually is.
By Claire Comstock-Gay
2022 bet awards Yesterday at 8:16 p.m.
BET Awards 2022: Full Winners List Congrats to Director .Paak!
sex diaries Yesterday at 8:00 p.m.
The Editor Tidying Up Just in Case His Lover Calls This week’s sex diary.
peg the patriarchy Yesterday at 7:29 p.m.
Jack Harlow Brought Lil Nas X (the T-Shirt) to the BET Awards “Wow i really love this man,” says Lil Nas X.
spinoff showcase Yesterday at 6:53 p.m.
What Could a Stranger Things Spinoff Be? Some helpful suggestions.
celebrity response Yesterday at 6:21 p.m.
Celebrities Respond to the Supreme Court’s Overturning of Roe v. Wade Celebrities including Viola Davis, Taylor Swift, and Michelle Obama respond to the Supreme Court’s decision.
its the industry baby Yesterday at 6:15 p.m.
What’s Up With Lil Nas X and BET? Lil Nas X was snubbed with zero nominations at the BET Awards.
wtf Yesterday at 6:08 p.m.
A Truck Driver Ran Into Pro-Choice Protesters in Iowa Other protesters across the country reported instances of violence, including excessive force by police.
overnights Yesterday at 5:36 p.m.
Evil Recap: Horny As Hell A demon in the sheet and a new cryptocurrency? This is literal hell.
abortion Yesterday at 3:27 p.m.
Celebrities, Activists, and Politicians React to the End of Roe The Supreme Court’s Dobbs decision has, as expected, overturned our constitutional right to abortion.