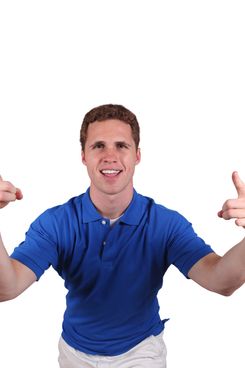 When they go to a baseball game, everybody secretly wants to come home with a baseball. This is a situation unique to baseball: You have a chance, almost anywhere you sit (especially if you show up for batting practice), to come home with a souvenir, provided of course the souvenir doesn’t come streaking toward your head and kill you. When the opportunity to grab a baseball presents itself, the prospect is so thrilling, so unexpected, that you discard all logic, reason, and sense of propriety to grab it, whatever the cost. The dream scenario is that you catch the ball with one hand and keep your beer balanced with the other, receiving an ovation from the crowd. The nightmare situation is Steve Bartman. Or what a fan did in Arizona last night.

Deadspin linked the video early this morning of a male Diamondbacks fan who wanted a baseball really, really badly.

It’s worth noting that — and no one has tracked down the fan to find out for sure yet — that this particular D-Backs fan seems a little … well, off. (We mean that not to sound insensitive. It is just an observation, and we are attempting to give the benefit of the doubt here.) But still: That’s some serious wrestling. You gotta really want that ball.

And the thing is, even if there is some sort of condition that’s a moderate excuse for such behavior, we’re not sure such an excuse is even necessary. When you have a chance at a baseball at a game, man, you gotta take it. The problem here was not so much that the fan went so hard for the ball: It’s that he took the ball away from a pretty woman, and that he was caught on television.

But he got the ball. That’s still worth something!

Perhaps there should be some rules set down for Baseball Lunging at games. Let’s try:

1. When a ball is available, consideration should be given to children, the elderly, and the disabled. We’d say anything within their arms’ reach should be ceded to them. Their arms’ length, not yours.

2. If you happen to be on television, consideration should also be given to women. If you are a woman, there is no need for any consideration, even to children, the elderly, and the disabled.

We’ve never gotten a ball at a game, and we’ve been to nearly 200 games in our lifetime. Someday. Whatever it takes.

Meet the Ball-Stealing Fan Destined to Make Clip Shows Till the End of Time
doing the work 28 mins ago
Busy Philipps Arrested at Supreme Court Protesting for Reproductive Rights “For equality!”
parties! 1:04 p.m.
Selena Gomez, Emily Ratajkowski, and More of the Bestest Party Pics This Week This week: Marc Jacobs’s fall 2022 presentation, NFT parties, and Pride celebrations.
instagram worthy 1:00 p.m.
Expensive Elopements Are the New Dream Wedding The more elaborate — and exclusive — the better.
By Kate Willsky
fashion 12:36 p.m.
Virgil Abloh’s Vision, on Full Display at the Brooklyn Museum We chatted with “Figures of Speech” curator Antwaun Sargent, who worked on the exhibition with Abloh before the designer’s death.
power 12:35 p.m.
Everything to Know About the WNBA Star in Russian Custody Legal experts say Brittney Griner’s trial is likely to end in conviction.
explosions 12:33 p.m.
Goop Candles Continue Their Campaign of Terror in the Hamptons Two men reportedly caught fire in a Sag Harbor Goop store.
under a million 12:19 p.m.
What’s More American Than Living in a Missile Silo? No on-site laundry, though.
vulture 10x10 12:09 p.m.
The Demogorgon Puzzle Don’t worry, these clues aren’t upside down.
sports 12:04 p.m.
Brittney Griner’s All-But-Predetermined Trial Begins The WNBA star is likely to be convicted and faces up to ten years in Russian prison.
the approval matrix 12:00 p.m.
Well, at Least Elmo Got Vaxxed Our guide to what’s highbrow, lowbrow, brilliant, and despicable.
gone sale-ing 12:00 p.m.
Your July 4 Sale Shopping Guide That NuFACE you wanted? It’s on sale.
design edit 11:58 a.m.
A Montauk Motel Renovation, Stadium Seating for Open Streets, and More Finds Plus a 1960s flyer for a whisper abortion consultation service run by clergy members.
life after roe 11:55 a.m.
Celebrities Respond to the Supreme Court’s Overturning of Roe v. Wade Including Viola Davis, Taylor Swift, and Ariana DeBose.
just checking in 11:51 a.m.
So What Is Rudy Giuliani Up to These Days? Trump’s former attorney has been keeping busy by dealing with January 6–related legal woes, making weird videos, and arguing with parade hecklers.
beyond bollywood 11:45 a.m.
India’s Zee5 Isn’t Perfect, But It Speaks the Languages The streamer may be a little messy, but it’s the best option to watch the subcontinent’s rich film output.
now streaming 11:44 a.m.
The 7 Best Movies and TV Shows to Watch and Stream July 4 Weekend There’s another murder in the building!
crop top no bra 11:36 a.m.
City Girls and Usher Invite Us to Cascade and the Cookout In the music video for their new summer bop, “Good Love.”
micro sales 11:27 a.m.
The Best Early Amazon Prime Day Deals (So Far) Get up to 50 percent off Amazon devices and in-house brands.
friday sales 11:21 a.m.
All of the Best July 4 Deals Including lots of Strategist-approved essentials.
this thing's incredible 11:02 a.m.
This Steamer Gives My Clothes a Dry-Cleaner-Quality Finish Every Time The tiny tool has a level of power seen only in industrial-grade machines.