Earlier this week, the Knicks let worldwide phenomenon Jeremy Lin walk, and the tortured cry that rose up from New York City could reportedly be heard by astronauts in the International Space Station. While the pain was still raw, we sent plucky New York interns Sarah Lawson and Sophie Hays to the streets surrounding Madison Square Garden, where they took the pulse of 60 self-described Knicks fans. What did they think of the decision to not match Lin’s Rockets offer? Who do they blame? And will they even — gasp — consider rooting for a different team? Turns out that, yes, a lot of them will.

Here are the results. (Note: For the second question, multiple answers were allowed.) 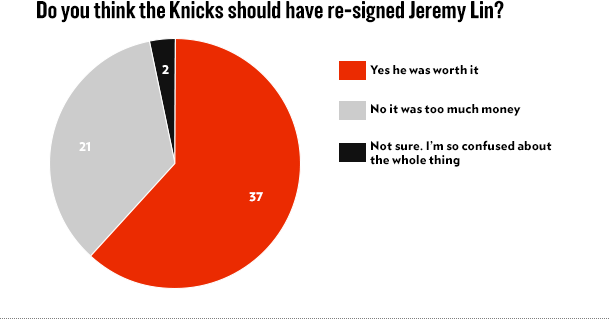 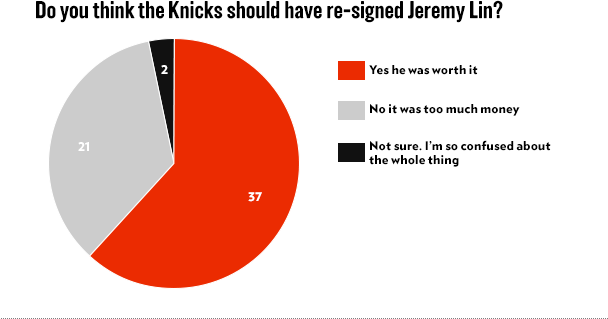 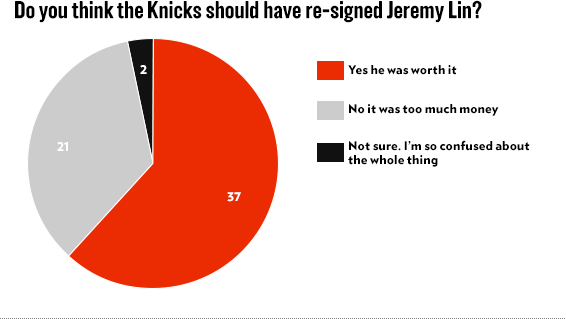 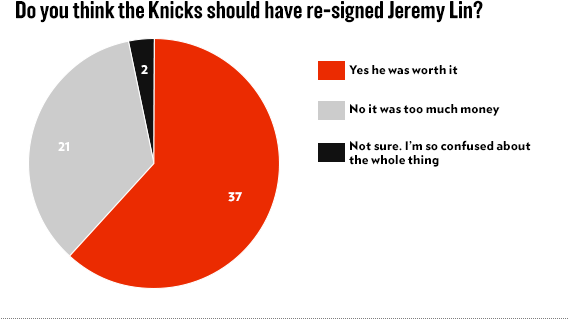 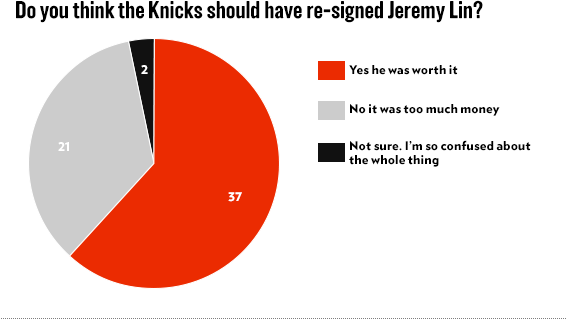 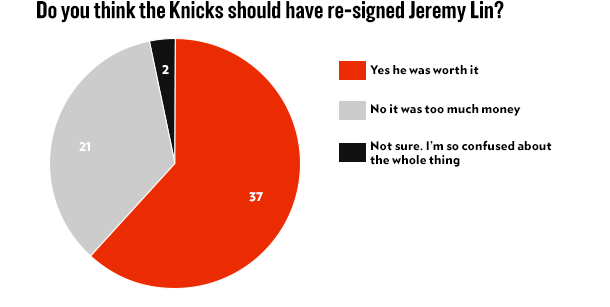 Knicks Fan Poll on Jeremy Lin
box-office beatdown 24 mins ago
Top Gun: Maverick Sinks Titanic at the Box Office Next goal: a reference in the spoken-word section of a Britney Spears song.
do i need this? 1:00 p.m.
The Dapper Dan x GAP Hoodie Collab Is Back To celebrate the Harlem legend’s birthday, Gap surprised customers with a new drop of the coveted hoodie.
overnights 12:58 p.m.
Flatbush Misdemeanors Recap: Too Legit to Quit Dan still has a bit to learn about how to control the classroom, but there’s hope for him yet.
brooding 12:31 p.m.
Sleepover Kits Are About Making Content, Not Playing Pretend Kids don’t need to glamp.
By Kathryn Jezer-Morton
vulture 10x10 12:31 p.m.
The Diva Puzzle 8-Across, Nine Letters: Broadway musical that will soon star Lea Michele.
last night on late night 12:29 p.m.
John Oliver Kinda Feels Like HBO Is Being Burned Down ‘for the Insurance Money’ “Hi there, new business daddy.”
what to eat 12:14 p.m.
Meet Brooklyn’s Newest Vegan Meatball Hero Garden Carver specializes in meat-free versions of beloved comfort foods.
By Megan Paetzhold
are u coming? 12:12 p.m.
Straight-Boy Swooning Over the East Villains TikTok Crew Guess which one’s nickname is “Phantom Smoocher”?
By Brock Colyar
deal of the day 11:51 a.m.
Outdoor Voices’ Exercise Dress Is the Cheapest We’ve Ever Seen In every color, too.
the pynk 11:34 a.m.
Tina Snow Drives the Boat All the Way to P-Valley Megan Thee Stallion’s alter ego makes a guest appearance on the hit Starz drama.
josh hawley 11:15 a.m.
The GOP Is the Party of Insulin-Gouging In their quest for zero-sum victories — and Democratic defeats — Republicans are incapable of tackling popular issues that would benefit them.
dystopias 11:06 a.m.
Westworld Has Become West Side World Present-day New York, with a few digital additions, was perfectly suitable as a dystopian set.
5 questions with... 11:04 a.m.
Tonya Lewis Lee Spotlights the Black Maternal-Health Crisis in Aftershock The documentary’s co-director explores health advocacy through art.
overnights 11:02 a.m.
90 Day Fiancé Season-Finale Recap: The Big Days This is perhaps the most boring happy ending to a season we’ve ever seen on this show.
the city politic 11:00 a.m.
Carlina Rivera on What Democrats Get Wrong About Latino Voters A daughter of the Lower East Side runs to represent the district where she grew up.
early and often 10:59 a.m.
Senate Democrats Finally Get Their Big Climate, Health Care, and Tax Bill Done An overview of what’s in the Inflation Reduction Act and what last-minute changes were made.
all up in your mind 10:03 a.m.
Beyoncé Cuffs It (Her Seventh No. 1 Album) With Renaissance Out of seven solo albums.
climate change 10:01 a.m.
What to Know About the New Climate Deal The Senate just passed the country’s most ambitious climate legislation to date.
2022 midterms 10:00 a.m.
The GOP’s Glut of Rookie Candidates Could Mean Lots of Costly Mistakes Experience in politics isn’t everything. But the GOP’s unusually large number of first-time candidates could mean midterms trouble down the road.
lies 9:53 a.m.
Alex Jones Owes Over $49 Million for His Sandy Hook Lies After a jury ordered him to pay one victim’s parents $45.2 million in punitive damages.