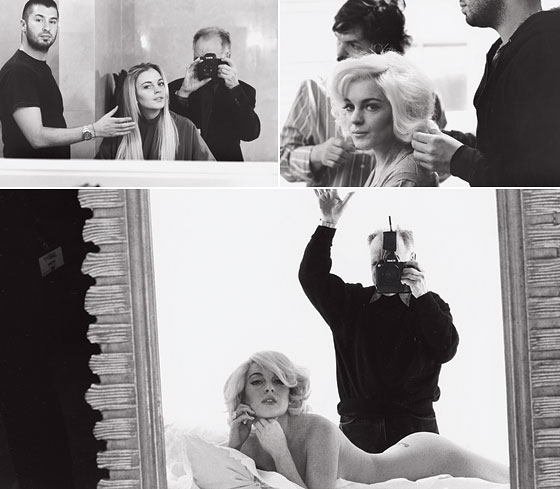 Top, Lohan in hair and makeup; above, as Monroe, with Stern.  (Photo: Styling by Elizabeth Stewart and George Kotsiopoulos/Margaret Maldonado Agency; hair by Andy Lecompte for Sunsilk/Solo Artists; makeup by Paul Starr for Chanel/Magnet LA; Vintage scarf by The Way We Wore, Los Angeles)

On Tuesday, February 5, under the cloak of secrecy, Lindsay Lohan went to the Hotel Bel-Air to meet photographer Bert Stern and restage the legendary series of photographs Stern had taken of Marilyn Monroe in 1962, six weeks before her death—a portfolio of pictures known as “The Last Sitting.” How did it come about? Stern had decided that Lohan was the perfect actress for this project, and when he asked us if we might be interested in working with him on it, we were, naturally, more than enthusiastic. So was Lohan—the 21-year-old happens to be a Monroe fanatic (you can read more about her in Amanda Fortini’s story)—still, we sent her Stern’s book so she could study up on the shoot. That morning, Lohan arrived (ten minutes early, actually). Hair and makeup took two hours; there were three wig changes to get precisely the right shape and shade of platinum. Stern duplicated the original 1962 set, down to the lighting. Lohan was unafraid of some of the eerier parallels between herself and Monroe, and she embraced every aspect of the shoot. She knew that Monroe had worn little more than a chiffon scarf, and she came with the same spirit. Seven hours and hundreds of frames later, the pictures were made. Photographer and star were satisfied, and photo director Jody Quon flew home, just a little stunned that it had happened at all.

respect the classics 8:15 a.m.
Billy Joel Led the Campaign for Warren Zevon’s Rock Hall Nomination “If anyone deserves to be, he does. He was a real original, and I don’t know if that’s appreciated enough.”
respect the classics 8:07 a.m.
Cyndi Lauper and Willie Nelson Lead 2023 Rock Hall of Fame Nominees 14 artists made the shortlist, connecting every genre of music.
the system 8:00 a.m.
The Government’s Telling Response to Tyre Nichols’s Death The reforms being considered would probably not have prevented his killing. But officials have gotten better at preempting outrage.
ask a beauty editor 8:00 a.m.
‘I Love That Lipgloss Is Back, But Are There Any That Actually Last? ’ These are the longest-lasting glosses, according to experts. Follow their application tips if you want better wear.
atmospheric rivers 8:00 a.m.
L.A.’s ‘Green Alley’ Experiments Are Working The city’s efforts to become flood- and drought-resilient are ready to be scaled up.
this thing's incredible 8:00 a.m.
This $12 Powder Replaced My Aerosol Dry Shampoos With no benzenes, no buildup — and no George Washington–wig effect.
the industry 8:00 a.m.
Reality Check The boom — or glut — in television documentaries has sparked a reckoning among filmmakers and their subjects.
By Reeves Wiedeman
spring fashion 8:00 a.m.
The Cool Tang of Ice Spice Visiting with New York’s princess of rap.
By Danya Issawi
the group portrait 8:00 a.m.
To Dream of Pickleball City The sport’s die-hard fans are fighting for courts they can call their own.
overnights 6:01 a.m.
The Bad Batch Recap: Star Wars Does Pandora Eywa has heard the wookiees’ prayers.
that 90s show 2:13 a.m.
Ashton Kutcher on Danny Masterson’s Trial: ‘Ultimately, I Can’t Know’ The That ’90s Show actor discusses his former co-star’s upcoming trial in March.
oscars 2023 Yesterday at 11:41 p.m.
The Academy Subtweets Andrea Riseborough’s Friends in Statement According to the Academy, Riseborough will keep her nomination.
coming soon Yesterday at 11:09 p.m.
Robert Pattinson Bringing More Eyeliner to The Batman Part II He will face his next villain, makeup remover, in 2025.
can't stream my poker face Yesterday at 10:41 p.m.
Did You Wait to Watch Poker Face? It Might Cost You New Peacock subscribers will have to pay for the service and no we’re not bluffing.
overnights Yesterday at 10:01 p.m.
Below Deck Adventure Season-Finale Recap: Fjord Explorer The crew tries to get their act together for the last charter, but it’s too late.
the vulture spot Yesterday at 7:38 p.m.
Harry Hamlin and His Stylish Jackets Are Magical on Mayfair Witches  Despite his character not having any powers.
creature capers Yesterday at 7:36 p.m.
The Hunt Is on to Find the Dallas Zoo Bandit Police are looking for whoever is responsible in a strange crime wave in which animals have been killed and apparently stolen from the zoo.
trailer mix Yesterday at 6:18 p.m.
We Support Women’s Right to Electrocute Toni Collette and Auli’i Cravalho don’t know what to do with The Power.
celebrity Yesterday at 6:15 p.m.
Ashton Kutcher Finally Addressed Danny Masterson’s Rape Trial He hopes his That ’70s Show co-star is “found innocent of the charges brought against him.”
ask an expert Yesterday at 5:42 p.m.
Alec Baldwin is Officially Charged in Rust Shooting. Now What? “There’s just a huge disparity in the charges.”