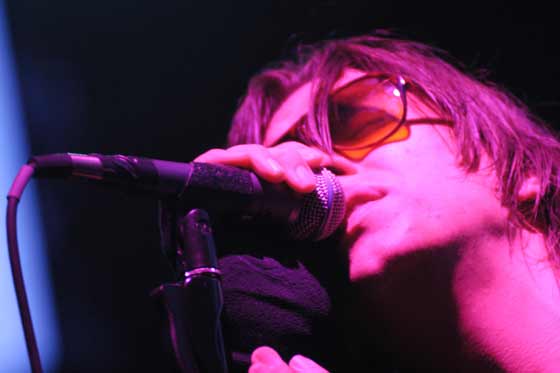 Kanye West and John Legend have been running a close race for the title of most ubiquitous special musical guest on the invitation-only party scene. In fact, we’ve seen West out and about so many times this year that had his name been the only one on the bill for last night’s Hennessy party at Capitale we might have (horrors!) forgone the free drinks.

Perhaps that’s why some shrewd event planner also managed to book the Strokes. However much money you had to throw at them to show up, you genius Hennessy liquor barons, it was totally worth it. The Strokes backlash is well chronicled: Drew Barrymore, Julian’s weight gain, sophomore slump, underappreciated third album, etc. But after last night, count us firmly in the Backlash-to-the-Backlash zone of the Undulating Curve of Shifting Expectations.

The boys took the stage around eleven, after a fascinating set by curly-haired British electro-chanteuse Alison Goldfrapp, who looked like a space-age Shirley Temple and was backed by four dancers dressed in bikinis and wolf masks or silver bodysuits and Greek theatrical masks. Pretty much every man in the room let out a guttural mating cry whenever the anonymous multiples took the stage. We had the same reaction to the Strokes.

They looked so amazing, it felt like running into a crush from high school and realizing that he’s still as cute as you’d remembered. Not only has Julian’s voice grown more expansive and powerful, he’s developed some choice dance steps and a way of hanging off the microphone that makes it seem, for the first time in a long time, that he’s really happy onstage.

Nick looks the same, which is very good, tousled hair permanently in his face, and if possible, even more aloof and arrogant. Albert, too, has retained his goofy stoner look — and that’s, sadly, not a great thing. Fab was predictably hot, cigarette dangling from his lips while he banged away at his drum kit. But for those of us who spent our early twenties pouring over Strokes articles in British music magazines and arguing over which one was the hottest, Nikolai, who’d never been in the running, was a total surprise. Slimmed down and buffed up, the mullet replaced with an impressively badass mohawk, he may have surpassed even Nick.

Then there were the celebs. Ewan McGregor, Kirsten Dunst, and Jason Schwartzman hid in the elevated VIP area, while Vanessa Minnillo, Danny Masterson, Jane Krakowski, Erica Christensen, and Dylan McDermott wandered through a crowd that couldn’t care less. Drew Barrymore stood several people deep behind us, dancing and screaming along to all the words. Joshua Jackson and girlfriend Diane Kruger danced along, badly. Seriously, Jackson looked like he was auditioning for an SNL skit about white guys with no rhythm. But the point was that people were dancing. In New York! “Folks, it’s been real. You’re the best crowd we’ve played to in a long time,” Julian said. Of course we are. You’re home.

+Comments Leave a Comment
The Strokes: Hotter Than Ever!