The consolidation of department stores — a trend cooling only because there’s nothing left to merge — leaves Manhattan as the last hospitable environment for that Norman Rockwell tradition, the holiday window display. The city’s flagships — Barneys, Bendel, Bergdorf, Bloomingdale’s, Saks, and Macy’s — began unveiling their windows over the weekend, and, as usual, they’re secular spectacles. Out: Santa, model trains, gingerbread men. In: Scary, postmodern vignettes.

So which ones are worth wistful gazing? We’ve rated them according to four categories: holiday cheer, narrative, a sense of childlike wonder, and set design. Check back daily for three installments, culminating on Wednesday when the winner is revealed. Today, get creeped out by Saks and Bergdorf’s. 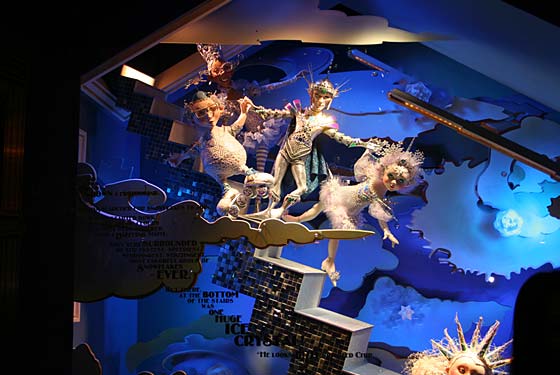 Saks searches for the perfect snowflake, which is apparently made of acid.Photo: Everett Bogue

Saks Fifth Avenue Saks has mounted a solid set that’s as secular and Santa-free as everyone else on the avenue (so far, only Macy’s has shown the guts this season to actually depict St. Nick) but wins points for at least constructing a narrative that has something to do with winter and encourages window shoppers to at least keep looking. On the other hand, the story apparently has something to do with Chip, Allie, and TayTay’s search for “the perfect snowflake,” and the characters themselves alternatively resemble a baroque spin of American Girl Place and Ming the Merciless from “Flash Gordon.” Saks wins bonus points for encouraging contributions to St. Jude’s Hospital that don’t involve buying third-grade knockoffs of Andy Warhol.

Bergdorf Goodman The grande dame of Fifth Avenue doesn’t disappoint in terms of sheer opulence and spectacle, although she does puzzle. All the obvious themes of Christmas are absent, and only one tableau — the wittiest one of all, featuring a polar bear in black tie — even depicts winter. The only narrative thread is a series of captions that describe, seven deadly sins style, what each scene is supposed to represent. So the unexpected ursine guest is labeled “Entertain,” while rearing show horses and their trainer are “Astound,” and so on. Though gorgeously styled with surprising textures and minute details that rewarded pressing my nose against the glass, their leitmotif still eluded me. Was it gypsy circuses? The Moulin Rogue? Marie Antoinette? Sunset Boulevard? Henri Rousseau’s The Dream? Much like Bergdorf’s clientele, the windows communicate using a vaguely Continental patois in which the mother tongue is foreign currency.