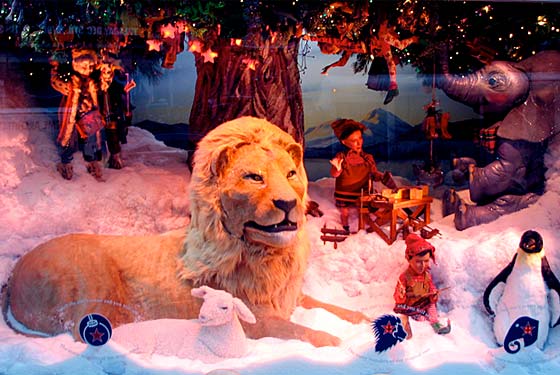 Macy’s windows themselves are a lot like the store’s merchandise — safe and middle of the road. Macy’s does score the highest in holiday cheer for daring to place both Santa and the tiniest hint of a religious statement in its windows in the form of a lion lying down with the lamb. (The overwhelming secularism on display this season makes me think that Bill O’Reilly might, in fact, have a point.) The set design is only so-so, lacking the sheer density of Bergdorf’s or the stylization of Saks’. And though each scene relates to the next, there isn’t much of a story arc, either. And I’m penalizing Macy’s further for its shameless embrace of Miracle on 34th Street, which is commemorated in a second set of windows featuring the sort of old-school animatronics that were state-of-the-art at the 1964 World’s Fair. But the fact remains that the movie was set in Gimbels, not Macy’s, and the latter doesn’t deserve any credit simply for outlasting its rivals.

This year’s winner is Saks, with 27 points!

Fear the windows at Saks and Bergdorf.
Feel overstylized at Bendel and Barneys.