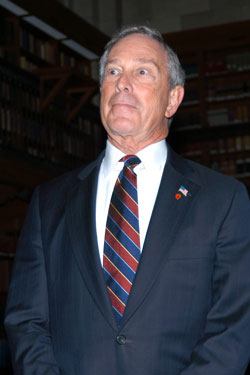 Proving that six years of prosperity can get a mayor thinking of posterity, Mayor Bloomberg announced ambitious environmental goals this morning in a speech at Flushing Meadow. Gone is the Bloomberg of December 2001, who chased quick economic fixes, like football stadiums and Olympics. Today Bloomberg wants to balance rising population against rising sea levels. He noted that city planners expect 900,000 more residents here by 2030. “With our administration not beholden to special interests, we now have the freedom to take on obstacles looming and to begin clearing them away,” he fairly gloated.

Bloomberg’s goals would pursue indisputably good things: get everybody within a ten-minute walk of a park, cut greenhouse-gas emissions by 30 percent, make 90 percent of the city’s waterways clean enough for recreation, improve all sewers, and invest in regional mass transit to keep travel times stable. As parsed, these goals have less stick than a can of Crisco in City Council chambers. They seem flexible enough to make good business sense, but what will happen in post-Bloomberg New York? Will potential Mayor Dick Parsons funnel them into a big bond package?

For now, PlaNYC belongs to the mayor’s new Office of Long-Term Planning and Sustainability. Bloomberg promised to solicit ideas from the public via Websites and meetings. Expect lawyers to wrangle the meaning of “ten minutes” and civic groups to want even more input from the public. But don’t doubt that Bloomberg will keep at it. “The predicament of our future is also our hope,” he said. If he hits one target, sweltering future generations may remember him as something other than the no-fun mayor who banned smoking and invited Republicans to Madison Square Garden. —Alec Appelbaum

+Comments Leave a Comment
Bloomberg’s Agenda Anything But Lame Duck