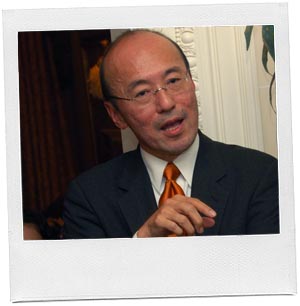 What’s the best meal you’ve eaten in New York?
Deeda Blair has a lobster salad that should be luxury taxed. But there are also the meatballs at Rao’s, a gastronomic anomaly of Italian home-style cooking. Sure, they are the size of softballs like you’d expect, but so light and airy they would float off your plate if they weren’t so weighed down with sauce!

In one sentence, what do you actually do all day in your job?
Convince people that clothes can be art. Oops, that’s not a sentence.

Where do you get your coffee?
My brother sends me Kona Coffee from Hawaii, but I get my double-shot, no-foam, skim lattes at Le Pain Quotidien, Madison and 84th.

What’s the last thing you saw on Broadway?
I lack the Broadway gene … though I do enjoy Sondheim, so maybe it’s there in some suppressed form.

Do you give money to panhandlers?
If they have great spiels, I’m tempted to. But, no, though I’m a believer in giving at least 20 percent of your income to charity, it has to be legit.

How often do you prepare your own meals?
Never, unless ordering delivery counts.

What’s hanging above your sofa?
A Chris Jordan photograph of computer chips laid out like a Blade Runner landscape.

How much is too much to spend on a haircut?
No amount is too much to look good, but since I don’t have any hair to speak of, even twenty bucks would be a scam.

When’s bedtime?
When the commercials for local businesses on streets you never heard of start airing.

Brunch: pro or con?
If you’re young and dating, maybe, but my experience is when you’re in a relationship for awhile, you’re not going to be in bed till all hours of Sunday so it’s irrelevant as a scheduling concept. Though poached eggs, Hollandaise, Canadian bacon, and buttered English muffin (see Lipitor) are great anytime.

What’s your thread count?
It’s not the count, it’s the fiber.

What do you hate most about living in New York?
Tourists who are oblivious to the stream of New Yorkers clotting around them as they amble at their clueless, decaffeinated pace.

What’s your brand of jeans?
Levi’s.

When’s the last time you drove a car?
When I rear-ended an off-duty cop. On the West Side Highway. At rush hour.

Who should be the next president?
A pragmatic politician with a clearly articulated, socially progressive, fiscally conservative vision whose vice-president is Barack Obama.

Yankees or Mets?
I’m not a football fan.

What makes someone a New Yorker?
Genetically wired to be S&M, dominant and submissive, in alternation, all the time.