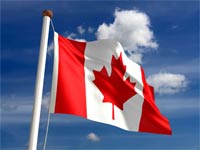 A memo from Dow Jones Newswires — the breaking-news service that’s a corporate sibling to the Wall Street Journal — crossed our in-box yesterday afternoon, and it had a very curious first sentence:

The Wall Street Journal’s decision to exit Canada and eliminate four editorial positions has understandably raised questions with Newswires’ staffers about our intentions in Canada.

The Journal’s decision to exit Canada? The newspaper is retreating from our neighbor to the north? We know Ottawa isn’t exactly a hotbed of market-moving business news, but, still, it seems a bit strange. Have conditions on the ground there gotten so difficult it’s unsafe to ask reporters to stay? Has the paper’s aggressive reporting on, say, ice-hockey fights so upset the government its reporters are no longer welcome? Or is the paper just bored?

Well, none of the above. “The Journal is laying off its small number (four full-time, two part-time) of direct staffers in Canada,” spokesman Robert Christie explained when we asked. “Instead, we will cover Canadian companies with the beat reporters in the U.S. who cover the relevant industries … We will cover Canadian international affairs, politics, and economics with a combination of DJ Newswires, which will retain twenty or so staffers in Canada, and Journal reporters in Chicago, New York, and Washington.”