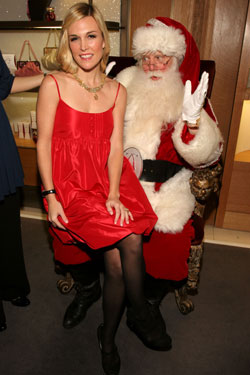 Santa, keep your hands off of Tinsley Mortimer!Photo: Patrick McMullan

So there’s this guy at your company Christmas party who keeps putting his hand up your skirt and breathing scotch in your face, but he’s not Christopher Hitchens. WTF? Today’s Wall Street Journal is on it, tracking the emotionally bankrupt phenom of the Bad Santa:

In 2002, Ms. Donahue began offering a Bad Santa for singing telegrams and party visits. …Her Bad Santa, whose services start at $110 for 15 minutes, sings Christmas carols with unprintable lyrics, breaks down in tears or perhaps throws gifts across the room.

Because it’s The Wall Street Journal, there’s a whole “wintersolsticblahblahblahicon
imageblahblah” section on the history of Santa the intern probably worked on all week, establishing that men getting drunk and feeling people up at Christmas parties may well be an homage to the Pennsylvania Dutch character of “Pelz Nicholas,” rather than, you know, men pretty much using any opportunity to get drunk and feel women up. There’s even the inevitable party pooper:

The Santa her company had hired sat on guests’ laps, flipped candy across tables and made lewd comments to some of the women. “He was a little obnoxious,” said Ms. Requiro, a company director. “I didn’t really even want to be near him, because it was uncomfortable. I didn’t eat my candy.”

You didn’t like your candy? You probably cried when he put you on his lap, too.

You Better Watch Out [WSJ]

+Comments Leave a Comment
Bad Santa at the Office Party: Is Nothing Sacred?