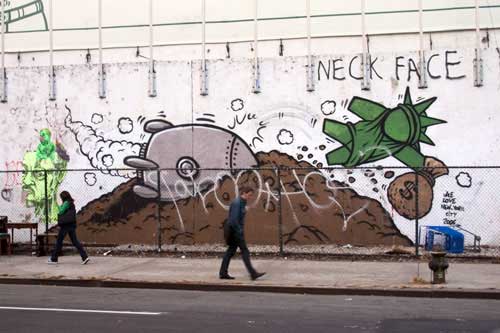 Brooklyn Heights: We promised an update: Boccelism beat the Old Dirty Barristers to be champeens of the Floyd NY Bocce League fall season. [Brooklyn Heights Blog]
Clinton Hill: It seems the Pratt Area Community Council believes residents want an Applebee’s on the corner of Clinton and Fulton. Eatin’ bad in the neighborhood! [Brownstoner]
Gowanus: Looking for the World War II rescue boat known as the Empty Vessel Project? Now it’s moored between the Carroll Street and Union Street bridges. [Gowanus Lounge]
Lower East Side: If you missed the show at 11 Spring Street, there’s still a Jace mural (above) at Houston and Bowery. [Razor Apple]
Midtown: It’s Santacon! And if a pack of Santas storming Times Square, Central Park, and the subway don’t put you in a festive mood, nothing will. [NYCStories]
West Village: Shopsin’s shutters, but look for a smaller, less stressful booth in the Essex Street Market in a few months. [Gridskipper]
Williamsburg: Things got a little stabby at Kellogg’s Diner over the weekend. [Gothamist]