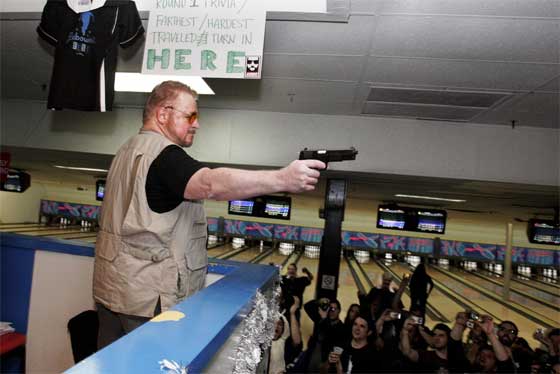 New York has a reputation for tamer costumes. That’s what we learned from Lebowski Fest co-founder Will Russell, who started celebrating the not-so-underground Coen Brothers movie The Big Lebowski with a day of bowling in Louisville in 2002. For the third contiguous year, the New York event (mirroring those in Las Vegas, Los Angeles, and Austin) was at Cozy Bowl in Jamaica on Sunday. But if New Yorkers don’t dress like the Jesus, they are delightful in their minutia: People were dressed as the amputated toe, the board the Dude nails to his front door, and a Moses and a Sandy Koufax, together spanning 3,000 years of beautiful Jewish tradition.

Lebowski Fest is geeky without the pretension of, say, a Star Wars convention — even a casual fan can drop a Lebowski quote or two without having to remember fictional factoids like the number of suns on Tatooine (okay, fine: two). So what is it about Lebowski that makes it fest-worthy? “Because Raising Arizona wasn’t set in a bowling alley,” said co-founder Scott Shuffit. That’s true, and, indeed, attendees, known as “Achievers,” can’t come up with a better reason. “I don’t understand why it became a cult film or why this cult film became so big,” says Megan Riley of Brooklyn, enjoying her second Lebowski Fest. “Why isn’t there a Heathers festival? I know people who quote that movie all the time that would love to dress up as characters from Heathers.” We call dibs on Kurt and Ram in a repressed, homosexual suicide pact. —Amos Barshad