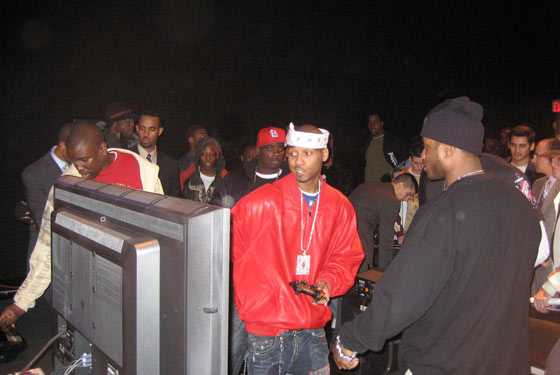 At the PlayStation 3 vs. Xbox 360 Challenge at the Apollo Theater yesterday, H3TV — apparently “the only high-definition flat-screen that allows players to simultaneously compete on both gaming systems” — allowed players to, well, simultaneously complete on both systems. (The crowd seemed to prefer the cheaper XBox.) Juelz Santana of Harlem’s beloved Diplomats rap crew — also known as Dipset — sat down for a spirited game of Madden and was all business, dodging both autograph requests and an aggressive pass rush from his opponent, an anonymous Dipset affiliate he swore was the crew’s resident gaming ringer. Santana came up short, but he made it out of the loss with his swagger intact, turning right around to sign those autographs for his patient fans and to extol the virtues of the H3TV. “If you’re always playing your game, your girl can watch Lifetime or something. She ain’t got to leave the room. It’s good for relationships!” Armed with that, we’re sure you can finally convince your girlfriend to let you buy a high-def flat-screen. —Amos Barshad