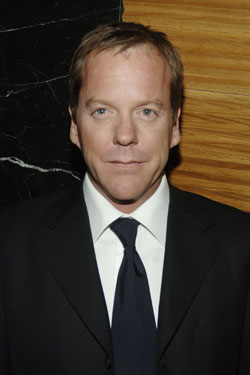 Kiefer Sutherland at the season premiere of 24.Photo: Patrick McMullan

At Thursday’s Men’s Vogue screening of the season premiere of 24, Kiefer Sutherland took time out from dinner to smoke a cigarette on the deck. After offering us his custom-tailored jacket, and then complimenting us on how nice we looked in it, the charming star opened up about Jack Bauer’s highly plausible cell phone and his — Kiefer’s, not Jack’s — love of horse-riding.

Where can I get Jack Bauer’s cell phone?
It’s pretty good, isn’t it? We try to make it realistic. In a blocking situation, if I need to get from one part of a set to another and the dialogue doesn’t actually fit that situation, I’ll say, “Chloe, hold on. I can’t hear you.” And then I’ll move to that spot. We do try to answer those questions, like does the cell phone always have reception?

What’s the deal with the 24 movie?
We were going to make it in the break this year, but it’s just too much to ask the writers to do. We are going to do it. It’s just a question of when.

Will you be watching your dad, Donald Sutherland, in Doug Aitken’s videos on the side of MoMA?
I have not seen it, but of course I will. You may see me on the side of the street. One of the difficult things with acting is that we don’t get to see each other very much. That’s what was nice about the Emmy night. I looked at him and said, “We’re going to have dinner tonight, aren’t we?” And I meant it.

I hear you’re fascinated with horses.
I did a lot of riding on Young Guns, and I ended up getting a place in Montana. There’s something where you get in a full gallop on a horse, not only are you in an act of faith with this animal, because it’s trusting you as well, but there’s a rhythm — unlike a trot, unlike a walk — that is so organic. The feeling is just unbelievable. So it grew out of that. I was riding horses eight hours a day making that film, with guns and cowboys and Indians. We were too young to know that the rest of our lives were not going to be this cool. —Jada Yuan