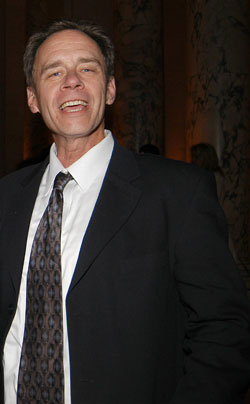 Do you agree with David Carr’s Golden Globe predictions? Believe he’s right that Scorsese will win for best director? Well, let the man know what you think already. He’s just twiddling his thumbs waiting for your feedback. Or so it seems from today’s media column on Carr’s obsession with the comments on his Carpetbagger blog. “Now I have become a day trader, jacked in to my computer and trading by the second in my most precious commodity: me,” he writes. “How do they like me now? What about … now? Hmmmm … Now?” We’re moved by Carr’s extreme concern, perhaps even more so because we’ve just been jilted by a certain West Coast writer.

In a (now-much-blogged-about) January 2 column in the Los Angeles Times, Joel Stein asked readers to do him a favor and not e-mail him:

“I get that you have opinions you want to share. That’s great. You’re the Person of the Year. I just don’t have any interest in them … A lot of e-mail screeds argue that, in return for the privilege of broadcasting my opinion, I have the responsibility to listen to you. I don’t. No more than you have a responsibility to read me. I’m not an elected servant.”

Compare this to Carr’s description of his rapport with a frequent commenter who went traveling:

“I sort of missed him. I dropped him a note and then called him in Israel about being off the grid (in particular, my grid).”

Why the sharp contrast in attitude? Could our journalists’ keen interest in readers’ opinions be another Reason to Love New York? Do you think so? We want to know! — Lori Fradkin

24-Hour Newspaper People [NYT]
Have Something to Say? I Don’t Care [LAT]

+Comments Leave a Comment
David Carr Loves You, Joel Stein Does Not