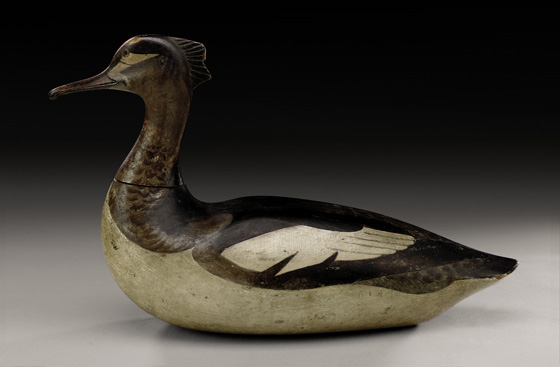 This handsome ducky could fetch half a million.Photo: Christie’s New York

More ways to spend your fat bonus this year, Wall Streeters: a very manly wooden duck. On January 19, the auctioneers at Christie’s are hoping to be the first to break the $1 million barrier in folksy duck decoys, hawking a cute, rare, and immaculately preserved white-bellied merganser. Carved from cedar and hand-painted shortly after the Civil War by a Massachusetts cemetery caretaker named Lothrop Holmes, the merganser decoy (used by hunters to attract waterfowl) is estimated by Christie’s to go for between $400,000 and $600,000. In November, an 1890s-era feeding plover fetched twice the presale estimate: $830,000. “Decoys are the new macho territory of folk collecting,” declares Margot Rosenberg, who runs Christie’s furniture, folk, and decorative-arts departments. “For hunter-gatherers on Wall Street, collecting is a sport unto itself.” Along with the hedge-funders, collectors from across the country will be bidding on 58 lots of decoys. —Geoffrey Gray