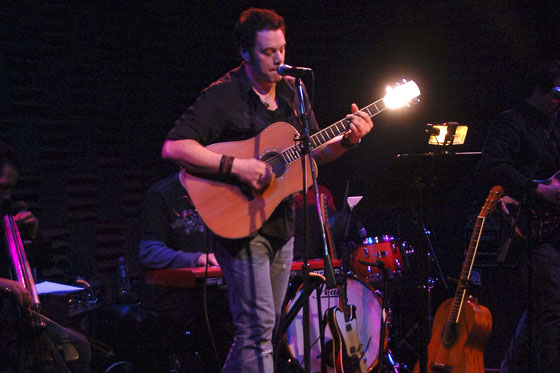 If there were ever a love child spawned by Vince Vaughn and Dave Matthews — just go with us here — he was performing last night at Joe’s Pub. Nicholas Barron, a Chicago-based singer-songwriter, kicked off the New York Times’ “Emerging Artists” series with an intro by, of all people, James Taylor. The launch of a new monthly concert series is only part of the Times’ annual “Arts & Leisure Weekend,” running through Sunday, which this year features a slew of artistic heavyweights (Joan Didion, Mikhail Baryshnikov) singing, reading, and talking about being great, being artistic, and being great at being artistic. The tradition began in 2001, either in celebration of the paper’s 150th anniversary or in competition with The New Yorker, which began hosting a similar event the year before. But last night, Barron and his backing band (including a bassist who looked like Ron Weasley in the Harry Potter movies) were busy emerging as artists. Barron has been jailed for busking on the streets of London and Chicago, and he founded the Coalition for the Advancement of Street Arts. Barron’s family supports his endeavors, and Joe’s Pub was filled with kin, right down to a third cousin, twice removed. For the remainder of the weekend, Joe’s Pub will host other performers like Morley and Martin Luther. The artists (and critics) who have already emerged — like New York’s own David Edelstein — will be interviewed or sit on panels at the Graduate Center at CUNY. You might be better off there. —Jocelyn Guest

THE FEED
1:40 p.m.
early and often
early and often
Trump (Mostly) Got His Revenge on Republicans Who Voted to Impeach
By Ed Kilgore
Only two of the ten House Republicans who voted to impeach will be on the ballot in November. Both benefitted from nontraditional primaries.
11:58 a.m.
tremendous content
tremendous content
All the Juicy Gossip From Jared Kushner’s Book
By Margaret Hartmann
Breaking History, the forthcoming memoir from the former First Son-in-Law/top Trump adviser, is brimming with dirt, jabs, and score settling.
9:00 a.m.
2022 midterms
2022 midterms
Liz Cheney Got Democrats to Vote for Her. It Didn’t Matter.
By Ed Kilgore
The rogue Republican won over quite a few Democratic voters, which made her terrible primary loss in Wyoming look a little bit better.