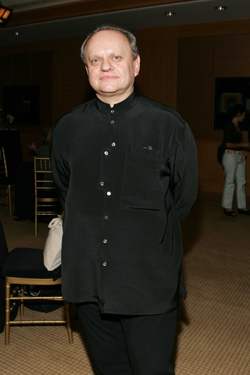 In the magazine this week, Jada Yuan spoke to some of the contestants from Bravo’s Top Chef about host Padma Lakshmi, wife of Salman Rushdie. In her conversation with Ilan Hall, Sam Talbot, and Cliff Crooks, Jada also asked them about the show’s villain, Marcel Vigneron.


This season, everyone ganged up on one chef, Marcel, who had a penchant for putting foam on every dish. Was he really as annoying as he seemed?
Ilan: Much worse.
Sam: Much, much worse. The past couple of episodes they’ve made him seem like some sort of a sweetheart. Everyone was asking me why I had this outburst with him, but they didn’t show him accusing me of cheating for fifteen minutes. I mean, I hope he watches the show and picks up some social skills along the way.
Cliff: Everyone and their mother is beating up on the kid. You know, I saw him at the premiere party, and in a room of a couple hundred people, he’s okay.

So what was so awful about him?
Ilan: They don’t show all the little bits and pieces leading up to people being angered with him. He’s always talking down to other people’s techniques and always questioning, and not in a creative way or constructive way. Everything is always insultory … if that’s a word.

What was your favorite annoying Marcel moment?
Sam: There’s no single moment, but he would switch into different alter egos in different places. On the beach he’d talk like a surfer, and other days he’d go gangster.
Ilan: This didn’t air, but he had to make this dish about lust and I told him that he’s never lusted after a woman, all he does is go home and jerk off thinking about Joël Robuchon. And the only thing he could think of as a comeback was, “I don’t jerk off to Joël Robuchon.” That was it!