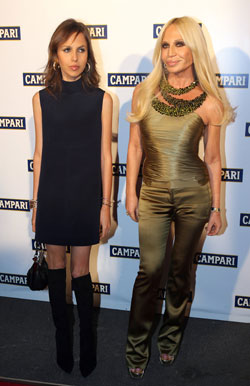 FASHION
• Allegra Versace, daughter of Donatella and heir to the fashion empire, is being treated for anorexia. [NYP]
• The ever persistent rumors of Hedi Slimane leaving Dior Homme keep swirling. Slimane has let his contract go unsigned for nearly a year. [WWD via Flypaper]
• Kate Moss picked close friend Irina Lazareanu as the face of her new Topshop collection. Lazareanu, incidentally, used to be the drummer of Pete Doherty’s band, Baby Shambles. [British Vogue]

FINANCE
• Bear Sterns CEO James Cayne made $40 million in cash, stock, and other compensation last year. That’s 32 percent more than he made in 2005, but still less than his peers at Morgan, Merrill, and Goldman. [Financial Times via DealBook/NYT]
• “Hey, sexy guy” — that’s what you’ll hear if you call News Corp.’s proxy solicitation numbers, thanks to a printing error. [MarketBeat/WSJ]
• Leonardo DiCaprio and Martin Scorsese are considering a movie about pump-and-dumper Jordan Belfort. [NYP]

LAW
• Napoli Bern, the firm that won a $1 billion settlement for fen-phen victims, is itself being sued over how it distributed the money. [New York Law Journal]
• Sheriffs raided the office of a disbarred New York attorney last week but couldn’t turn up the files Kenneth Heller is keeping from former clients. [New York Law Journal]
• How does John Roberts’s salary stack up against other Supreme Court chief justices? He’s got nothing on Charles Evans Hughes. [Law Blog/WSJ]

MEDIA
• Contrary to Bill Keller’s previous suggestions, the Times will maintain a public editor after Byron Calame’s term ends in May. No word on his successor. [WWD]
• Jane Pratt remains mum about her departure from Jane, but she’s not reluctant to talk of her affair with Drew Barrymore. [NYP]
• Harper Perennial’s The Average American Male was too hot for most newspapers, so they spent $10,000 on three risqué viral videos. Viewed more than a million times, the videos helped send the book back to press three times in two weeks. [WSJ]