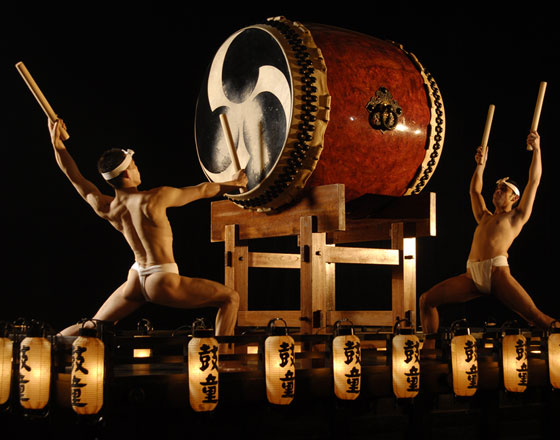 If you’re in the mood for some scantily clad men beating on things, you’re in luck tonight. Kodo, Japan’s most prominent taiko collective, are doing two shows at Joe’s Pub. So what exactly is taiko? It’s an athletic, high-energy Japanese drumming tradition rooted in Buddhist ritual. Heavy rhythms; colorful costumes; flutes; harps; lean, half-naked men jumping and leaping into enormous drums; yelling; and wild calligraphers splashing the canvas — that all sort of explains it. Performing taiko requires physical strength as well as natural rhythm, as we learned this morning during a doddering attempt at the drums. The members of Kodo live, work out (the artistic director runs ten kilometers a day, he told us), and rehearse together in what we can only imagine is a utopian collective on Sado Island. “There is no one around,” manager Sun Akimoto says. “So we can drum very loudly.” That too. —Jonah Green