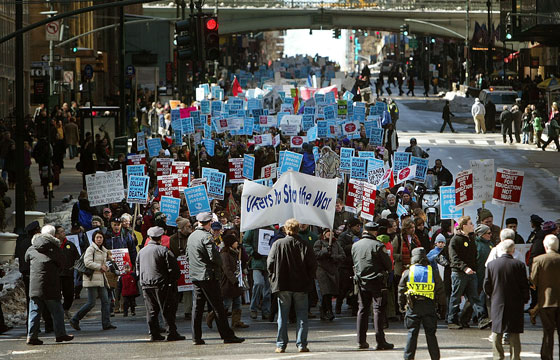 Antiwar protesters crossing 42nd Street during a march marking the fourth anniversary of the war in Iraq. Photo: Getty Images

Tomorrow marks the fourth anniversary of the start of the Iraq war and protesters across the country marked the occasion yesterday with marches from San Francisco to Washington. Here in New York, demonstrators moved through midtown, crossing 42nd Street (above) to walk north along Third Avenue. We imagine there was less drinking at this parade than at Saturday’s Saint Patrick’s Day event, but just as many cops.

THE FEED
15 mins ago
the city politic
the city politic
Mondaire Jones on the Need to Meet Progressive Expectations
By Nia Prater
The congressman talks about switching districts, how Democrats can win the midterms, and why America’s problems go beyond Trump.
4:56 p.m.
just checking in
just checking in
So What Is Rudy Giuliani Up to These Days?
By Margaret Hartmann
Trump’s former attorney has been keeping busy by dealing with January 6–related legal woes, making weird videos, and arguing with parade hecklers.
3:35 p.m.
early and often
early and often
2022 Midterms: A Guide to the Races Worth Watching
By Ed Kilgore
A cheat sheet to keep track of all the crucial races, primary upsets, and campaign drama — Trump-fueled and otherwise — from now through Election Day.