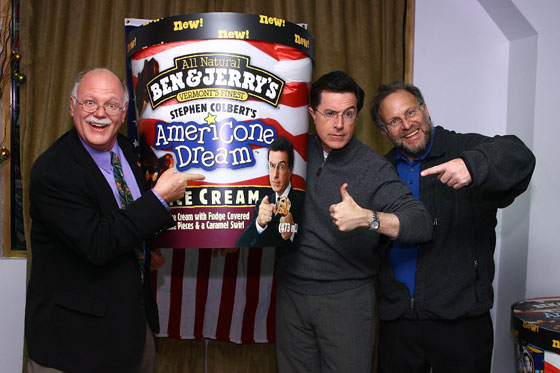 Last night, Stephen Colbert joined Ben Cohen and Jerry Greenfield at the Dream Hotel’s penthouse to launch the hip — and hippie — ice-cream company’s new flavor, Stephen Colbert’s Americone Dream. We can vouch for the product, which was served gratis to the guests: vanilla ice cream loaded with caramel and fudge-covered waffle bits. But how does the famed conservative pundit feel about being lumped in with such lefty Ben & Jerry’s flavor namesakes as Jerry Garcia, Phish, and, apparently, Willie Nelson? We discussed this and more with Stephen, Ben, and Jerry.

When you taste it, what makes you think, This is Stephen Colbert’s ice cream?
Stephen: It actually tastes like me. No one will ever find out, because I’m married, but this is what I taste like. Very sweet.

Does anyone know what’s currently the best-selling Ben & Jerry’s flavor?
Jerry: I would say Cherry Garcia.

Stephen, what’s your plan for taking Cherry Garcia down?
Stephen: Well, constant shilling for the ice cream would be one. Self-promotion. Guilt. Guilting people could actually help, because my proceeds go to charity: If you people are interested in saving the world and helping children, that would be good.

What’s the charity?
Stephen: It’s the Stephen Colbert Americone Dream Fund for Questionable Causes. I thought to myself, What instills confidence in people? Stephen Colbert. It’s an honest-to-God charity, for the families of vets, for children with medical and nutritional needs — for needy children. By the way, this is the ice cream for any federal holiday. It’s Americone Dream.
Ben: It’s the most patriotic flavor we’ve ever done.
Jerry: It does raise the question: How are you gonna go global?
Stephen: Same way the United States does: by invading. We’re gonna have preemptive desserting.

Any new flavors for 2008?
Ben: I think we’re gonna ride Colbert as long as we can!
Stephen: You have Willie Nelson on retainer. I am taking him down. Willie Nelson, watch your back! I’m boarding your bus, and I’m coming for you, pigtails! —Marc Tracy