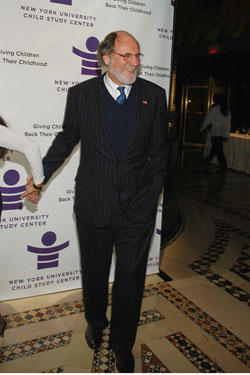 New Jersey Governor Jon Corzine used to date (famously) union leader Carla Katz of Communications Workers of America Local 1034. Now, according to the leaders of five other locals, that relationship is ruining their chances at a better contract. But instead of accusing Katz of being the governor’s puppet, other union leaders think she’s too tough, that “there was probably no contract that was acceptable to her,” one of them told the Times. Besides that, Katz’s peers believe that she tried to negotiate directly with Corzine away from the bargaining table. The theory is that Katz wants her union cred spotless because she’s accepted hundreds of thousands of dollars from Corzine in tuition bills and mortgage forgiveness. While the passion may be cold — the couple insists they broke up in 2004 — the financial heartstrings are still attached. And that’s why Katz is in trouble whatever she does. If she caves, she’s accused of accommodating her ex-boyfriend. If she takes a hard line, it seems self-serving. And when it’s all over, Katz still gets to explain how her $100,000 salary pays for a $1 million condo. In the meantime, listen closely: That sound you hear is Nora Ephron writing her next romantic comedy.