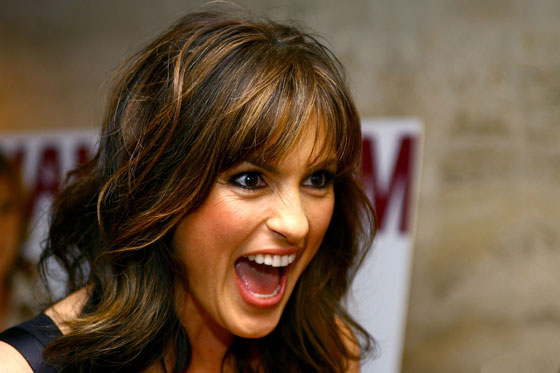 Every Monday through Thursday, Daily Intel ends its day with Party Town, a feature that identifies a few of the charity galas or premieres happening that evening and then lists the celebrities who are scheduled to appear. Invariably, that list includes Law & Order: SVU star Mariska Hargitay. So when she got her own event last week for making the cover of Gotham, we declared Hargitay the “patron saint” of Party Town. And we (sarcastically) chided the Gotham article for mentioning all of Hargitay’s fine qualities but “shamefully failing to note her fetching singing voice and kindness to disabled puppies.” Though we have never heard from Hargitay, her fans came in her defense. After the jump, three outraged e-mails.

I don’t know why you guys wrote untrue things about Mariska so just shove it.

To whomever wrote this “article.”

What’s you problem? Why don’t you talk about what positive things she does, I know that like me, you live thru this “famous” people and of the things they do and they don’t, so why don’t you use you writing time dishing all the other “so” famous people that really, really party all the time and are showing wherever private parts we are sure not want to see or video taping them selfs having sex? The woman has a right to go to a party and enjoy her self after all the other good deeds she does, don you think? or maybe you don’t know what good she has done for others? Just to mention.

To whom ever wrote the following article:

What is your problem with this wonderful woman? Is it that she isn’t out drinking and doing drugs? Is it that she hasn’t made a sex-video tape of her and her husband? Or because she isn’t in every photo of the week? Because it seems that the only thing that Mariska did wrong was not have a ridiculous amount of publicity.

I apologise if this seems rude, but Mariska Hargitay is an idol to many … so perhaps you ought to take that into consideration before writing ridiculous articles such as these.

+Comments Leave a Comment
Do Not Mess With Hargitay