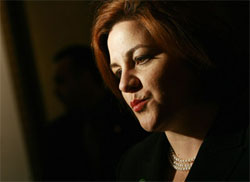 Shunted to the back of tomorrow’s St. Patrick’s Day Parade, New York City firefighters aren’t the only ones who are angry with parade chair John Dunleavy. For several years, Dunleavy has banned gay groups from marching and last year would not allow City Council Speaker Christine Quinn, who’s 100 percent Irish and 100 percent gay, to walk wearing so much as a pink pin. Though she marched on March 4 in a gay-friendly parade in Woodside, Quinn will blow off the Ancient Order of Hibernians entirely this year by taking her dad, her partner Kim Catullo, and five council members (including Staten Island Irishman Mike McMahon) to a more inclusive parade in Dublin. While Dunleavy didn’t return calls for comment, Quinn did talk to Tim Murphy about accessories, the Irish, and her father. Her words are after the jump.

So what symbology will you be rocking in the free-to-be Dublin parade?
I’ll wear pins with the crossed flags of the U.S. and Ireland, an apple to symbolize New York City, and the symbol of the Irish Lesbian and Gay Organization [which in the nineties lost its court case against the New York parade to march under its banner]. I’m clearly going to be overaccessorized.

If Dunleavy told you he just didn’t want you parading your gayness in the parade, what would you say?
I’d tell him that the history of Ireland is a struggle for people to be who they are, and that I’m not going to march in a manner that denies who I am.

I remember when your dad [retired electrician Lawrence Quinn] told the press that he wasn’t happy that you were a lesbian but he made the best of it. How’s he doing on that front?
He couldn’t be more supportive. He’s going to Ireland with me. My father is 80 years old. Forty years ago, if you asked him what the perfect scenario for his daughters would be, one of them being a lesbian probably wouldn’t have been on his list.

Who’s the most beautiful Irishwoman?
That’s hard to say. My mother [Mary, who died of breast cancer when Quinn was 16] was a very attractive Irishwoman. She had beautiful brown hair. Her maiden name was Callaghan.

And finally — do you think we drink too much as a people?
I think I’m not going to answer that question. We’ve got enough controversy in this story.