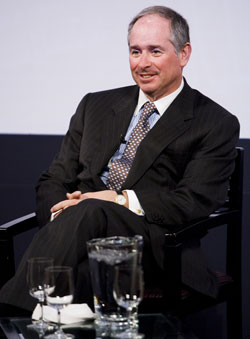 It used to be that if you landed yourself a job at Goldman Sachs, you were a prince of Wall Street, the envy of everyone you knew. But these days, the folks at Goldman are probably starting to feel like every other chump who isn’t a hedge-fund manager or private-equity kingpin. In an SEC filing yesterday confirming its plans to go public, private-equity house Blackstone Group declared that its employees, on average, generate nine times more earnings than the rank and file at Goldman Sachs. Blackstone has 770 employees, each of whom produced an average of $2.95 million in net income last year, for a total of $2.27 billion. Production from Goldmanites was a relatively paltry $360,000. Could it be? A Goldman employee is worth just one-ninth of a Blackstone employee? Wall Streeters are yammering away about the fact that Goldman Sachs isn’t one of Blackstone’s underwriters, either. The smart money says it’s because Goldman is likely working on another private-equity shop’s IPO, perhaps that of Kohlberg, Kravis & Roberts (KKR). Or it could just be that the folks at Blackstone don’t do business with people who don’t know how to put up the big numbers. —Duff McDonald

THE FEED
5/18/2022
early and often
early and often
Progressives Win Some, Lose Some in House Primaries
By Ed Kilgore
AIPAC and a crypto billionaire’s PAC made waves in multiple House Democratic primaries on Tuesday.
5/18/2022
politics
politics
Poorly Conceived Biden Disinformation Board Put on Pause
By Benjamin Hart
Its embattled leader, Nina Jankowicz, announced her resignation on Wednesday.
5/18/2022
pool party
pool party
The Most Powerful Person in Media Missed the Media Power Person Party
By Shawn McCreesh
But his model mom, Maye Musk, was there.

5/18/2022
early and often
early and often
Idaho Governor Brad Little Fends Off Trumpy Usurper
By Ed Kilgore
In Tuesday’s GOP primary, Little trounced Lieutenant Governor Janice McGeachin, who’d tried repeatedly to cancel his COVID policies.
5/18/2022
politics
politics
De Blasio Still Looking for New Job, Mulls Run for Congress
By Nia Prater
The former mayor previously considered runs for New York governor and the 11th Congressional District.
5/18/2022
early and often
early and often
Trump Wants Dr. Oz to Copy Him and Declare Victory Before the Race Is Called
By Nia Prater
The race between Mehmet Oz and David McCormick has not been called and will likely head toward an automatic recount.
5/18/2022
qanon nation
qanon nation
The ReAwaken America Tour Is the Start of QAnon 2.0
By Laura Jedeed
The conspiracy theory that has gripped the conservative movement is evolving. But into what?
5/18/2022
early and often
early and often
2022 Midterms: A Guide to the Races Worth Watching
By Ed Kilgore
A cheat sheet to keep track of all the crucial races, primary upsets, and campaign drama — Trump-fueled and otherwise — from now through Election Day.
5/18/2022
early and often
early and often
Trump Couldn’t Give Oz a Decisive Win Over McCormick
By Ed Kilgore
Three MAGA-y candidates dominated Pennsylvania’s GOP Senate primary, but Trump’s official pick appears to be headed to an automatic recount.
5/18/2022
the money game
the money game
The Crypto Cult of Do Kwon: ‘If It Was a Ponzi Scheme, They Did a Good Job’
By Kevin T. Dugan
The volatile, charismatic founder created a $60 billion empire by calling people “poor.” It all came crashing down in a couple days.
5/17/2022
early and often
early and often
Cargo Shorts Enthusiast John Fetterman Wins Democratic Senate Race
By Nia Prater
He won days after suffering a stroke and may be Democrats’ best hope for flipping a Republican senate seat.
5/17/2022
the truth is in here
the truth is in here
Pentagon: UFOs Are Everywhere, Aliens Not So Much
By Benjamin Hart
At the first congressional hearing of its kind in more than 50 years, officials said that sightings of unidentified objects have skyrocketed.
5/17/2022
covid-19
covid-19
How to Order More Free Home COVID Tests From the Government
By Margaret Hartmann
U.S. residents can now order a third batch of eight free COVID-19 tests from the federal government. Here’s how to claim them.
5/17/2022
politics
politics
Biden Condemns White Supremacy As ‘Poison’ During Speech in Buffalo
By Nia Prater
The president and First Lady visited Buffalo to pay their respects in the aftermath of a racist rampage that left ten people dead.
5/17/2022
what we know
what we know
What We Know About the Racist Attack at a Buffalo Supermarket
By Chas Danner
As the city mourns the ten Black victims murdered in the attack, troubling details about the white supremacist gunman continue to emerge.
5/17/2022
early and often
early and often
Generic Ballot Shows Republicans on Track to Retake House
By Ed Kilgore
The reliable indicator shows Republicans with a modest but steady lead. If 2022 is anything like recent midterms, the House will flip for sure.
5/17/2022
the national interest
the national interest
Joe Manchin Has Done a Terrible Job Fighting Inflation
By Jonathan Chait
The pivotal senator would rather complain about prices than do anything about them.
5/17/2022
life after roe
life after roe
Ending Roe v. Wade Is a War on Women and Children
By Sarah Jones
The right offers nothing but more suffering to the people it purports to help.
5/16/2022
early and often
early and often
Join Truth Social and Get Trump Posts a Whopping 6 Hours Early
By Margaret Hartmann
Slightly early access is all Truth Social will have going for it if Donald Trump returns to Twitter.
5/16/2022
early and often
early and often
The Democratic Party Is Extremely Unpopular Right Now
By Benjamin Hart
New poll numbers do not bode well for the party’s midterms chances.
5/16/2022
politics
politics
Draft Congressional Map Upends Several New York Democrats’ Districts
By Nia Prater
The proposed map, which is far less favorable to Democrats, is set to make some long-serving House members primary opponents.
5/16/2022
ukraine invasion
ukraine invasion
You Won’t Be Able to Get a Big Mac in Moscow Ever Again
By Benjamin Hart
McDonald’s is pulling out of Russia entirely as Putin’s invasion of Ukraine drags on — ending an era that began with promise.
5/16/2022
the national interest
the national interest
Yes, Tucker Carlson Shares Blame for the Buffalo Supermarket Attack
By Jonathan Chait
The white nationalist’s conservative allies mount an unconvincing defense.
5/16/2022
early and often
early and often
Pennsylvania Senate Candidate Fetterman Recovering From Stroke
By Chas Danner
The lieutenant governor said he is feeling better and that doctors told him he will make a full recovery.
5/16/2022
the money game
the money game
How Red States Are Trying to Snuff Out Green Investing
By Jake Bittle
Numerous states are launching a messy preemptive strike against so-called ESG efforts by the financial sector to move away from fossil fuels.