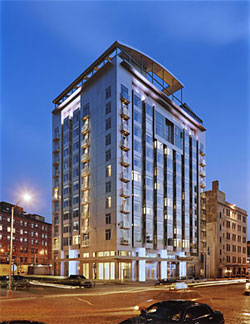 Andrew Berman, chief of the Greenwich Village Society for Historic Preservation, notched a victory Friday as self-appointed Sheriff of Downtown Tastefulness. For weeks, he’d organized protests and demonstrations near the well-lit, eight-foot-high ads around the Hotel Gansevoort. Today he sent a letter to Buildings Commissioner Patricia Lancaster declaring that the city had seen the light. Berman says the city plans to tell hotel developer Michael Achenbaum that his illuminated signs break the zoning law because they stand at less than a 90-degree angle to Hudson Street. The two-page letter notes that if Achenbaum turns the signs to the legal pitch, “this would of course turn the signs toward the windows of the Hotel, and we hope that the Hotel will simply choose to remove the signs.” Now even if that does happen, it’s not as if the meatpacking district will morph into a redoubt of elegant restraint. But fear not — Berman’s letter CCs all local elected officials and nameless “community groups” with hints of further battles. A round at Pastis, anyone? —Alec Appelbaum

Letters from the Greenwich Village Society for Historic Preservation [PDF]

THE FEED
21 mins ago
all the live long day
all the live long day
Why America’s Railroads Refuse to Give Their Workers Paid Leave
By Eric Levitz
Wall Street’s new robber barons can’t make the trains run on time.
2:23 p.m.
early and often
early and often
Herschel Walker Can’t Shake His Texas Residency Problem
By Ed Kilgore
The GOP Senate candidate is being hit with renewed questions about his residency, which underscore claims that his heroic image in Georgia is hollow.
12:16 p.m.
politics
politics
Hakeem Jeffries Elected As Next Leader of House Democrats
By Nia Prater
The 52-year-old congressman will become the first Black person to lead a congressional party.