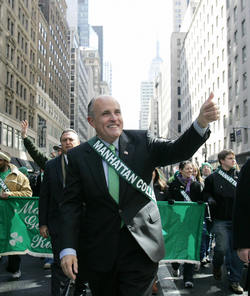 News broke last Thursday that the Houston-based law firm Bracewell & Giuliani (yes, that Giuliani) was lobbying for Citgo, the oil company controlled by Venezuelan president and American critic Hugo Chávez. Rudy Giuliani had nothing to do with lobbying for Chávez, his campaign pointed out, but links to international rogues have caused Giuliani problems before. In his 1989 failed bid for mayor, Giuliani’s then-firm, White & Case, repped Panamanian strongman Manuel Noriega. “Obviously, you’re vulnerable when you are receiving income from a firm that’s lobbying for a company that’s perceived as damaging our civilization,” says Ed Koch. “You can get rich, or you can get elected.” Ouch. Swap Chávez for Noriega and Koch could have made that statement in 1989. After the jump, a look at the now-familiar pounding Giuliani took back in the day.

If Rudy Giuliani doesn’t know his law firm is representing Noriega, a notorious drug dealer and dictator, how is he going to manage a city with nearly a quarter of a million employees? —Harrison Goldin, former city treasurer and Democrat, to The Times of London, May 21, 1989

The ten-second advertisement shows Mr. Giuliani on one side of the screen as an announcer declares that “Rudy Giuliani is being paid almost $1 million by the law firm that represents Panama’s drug-dictator Noriega.” Gradually, a portrait of General Noriega appears next to Mr. Giuliani as the announcer says, “That’s incredible. That’s Rudy Giuliani.” — Description of an anti-Giuliani ad paid for by Republican competitor Ronald Lauder in the New York Times, May 20, 1989

“I don’t think personally that Giuliani is tied to General Noriega’s drug money … but it’s a legitimate campaign issue that his law firm has ties to law firms that do business with the city.” — Rich Weiss, political consultant, to Newsday, May 28, 1989

…Mr. Giuliani, eyed by Republican leaders as a future presidential candidate, has been seriously damaged by charges this week that his law firm is associated with Panamanian dictator Manuel Noriega. Mr. Giuliani’s opponents claim that the candidate’s salary of some $1 million is effectively drug money… — The Independent, May 30, 1989

With his campaign set back by reports that the Panamanian Government of Gen. Manuel Antonio Noriega has been a client of his new firm, Mr. Giuliani is looking, aides said, for the most diplomatic way to detach himself without making it seem he erred in joining White & Case in February and without “burning his bridges,” as one friend put it. — Washington Post, June 8, 1989

THE FEED
28 mins ago
work
work
The Little-Known Policy Wreaking Havoc on Workers’ Lives
By Bryce Covert
Opaque corporate “points” systems penalize employees for medical emergencies and make it all but impossible for them to appeal.
8/18/2022
early and often
early and often
Transphobic Utah Parents Launch Witch Hunt Against Teen
By Sarah Jones
When their daughter lost to another girl, the parents asked the teen’s school to investigate whether she was transgender.
8/18/2022
early and often
early and often
Who Is This Succession-Themed Adam Laxalt Attack Ad For?
By Margaret Hartmann
The target appears to be Succession-obsessed media types like me, but there’s one problem: I can’t help but love every awful member of the Roy clan.

8/18/2022
early and often
early and often
2022 Midterms: A Guide to the Races Worth Watching
By Ed Kilgore
A cheat sheet to keep track of all the crucial races, primary upsets, and campaign drama — Trump-fueled and otherwise — from now through Election Day.
8/18/2022
tremendous content
tremendous content
A Guide to the Many Houses Mehmet Oz Forgot He Owns
By Margaret Hartmann
The Pennsylvania GOP Senate candidate recently said, “Legitimately, I own two houses.” He lost track of a few mansions.
8/18/2022
the law
the law
The Accountant Flips on Trump’s Empire
By Matt Stieb
The Trump Organization CFO Allen Weisselberg pleads guilty as part of a deal that requires him to testify against the company.
8/18/2022
the national interest
the national interest
Ron DeSantis’s Florida Is Where Free Speech Goes to Die
By Jonathan Chait
The governor once again shows he’s far more illiberal than the “woke” left he vilifies.
8/18/2022
encounter
encounter
Can Nasty Nestor Turn Around the Yankees?
By Ross Barkan
The pitcher has become an unlikely star for the Yankees. He’s just happy to be here.
8/18/2022
crime and punishment
crime and punishment
The Death Penalty Case That Went Too Far
By Lara Bazelon
Oklahoma is set to kill Richard Glossip, but he’s almost certainly innocent. Even Republicans there are in revolt.
8/17/2022
early and often
early and often
The Culpable Liz Cheney
By Sarah Jones
The hard-line politics she used to pursue power, including Islamophobia, gave rise to Trump and eventually her own downfall.
8/17/2022
the money game
the money game
Meme Stonks, Dog Coins, and Elon Musk Joke Investments Are Mooning Again
By Kevin T. Dugan
Wall Street right now is looking like the weirdest days of 2021, with Reddit, crypto, and Tesla’s technoking once again fueling speculative riches.
8/17/2022
early and often
early and often
Sarah Palin Still Has Two Shots at Going to Congress
By Ed Kilgore
Palin has yet to be eliminated in Alaska’s complex new voting system. Her celebrity status is still both her biggest asset and her biggest liability.
8/17/2022
aviation
aviation
The Return of Supersonic Travel Is an Eternal Disappointment
By Jeff Wise
Every few years, there’s a new promise that passengers will soon feel as if they’re in a Concorde, but there are good reasons it never takes off.
8/17/2022
tremendous content
tremendous content
All the Juicy Gossip From Jared Kushner’s Book
By Margaret Hartmann
Breaking History, the forthcoming memoir from the former First Son-in-Law/top Trump adviser, is brimming with dirt, jabs, and score settling.
8/17/2022
2022 midterms
2022 midterms
Liz Cheney and the Demise of Anti-Trump Republicanism
By Ed Kilgore
Until recently, the Wyoming representative was a rising GOP star and heir to the party’s conservative conquerers. Then she ran afoul of Trump.
8/17/2022
games
games
The ‘Real’ Home-Run Record Is 73, Not 61
By Will Leitch
Aaron Judge’s tremendous season has rekindled a tiresome argument about the purity of the game.
8/17/2022
social studies
social studies
My Week With America’s Smartest* People
By Eve Peyser
The strange but affirming experience that is Mensa’s Annual Gathering.
8/16/2022

Biden signs sweeping bill to tackle climate change, lower health-care costs
—The Washington Post
8/16/2022
the city politic
the city politic
Mondaire Jones on the Need to Meet Progressive Expectations
By Nia Prater
The congressman talks about switching districts, how Democrats can win the midterms, and why America’s problems go beyond Trump.
8/16/2022
just checking in
just checking in
So What Is Rudy Giuliani Up to These Days?
By Margaret Hartmann
Trump’s former attorney has been keeping busy by dealing with January 6–related legal woes, making weird videos, and arguing with parade hecklers.
8/16/2022
early and often
early and often
Trump Wants to Make America Vote Like It’s the 1960s
By Ed Kilgore
His demand that all voting occur on Election Day, in person, and via paper ballots would radically restrict voting nationwide.
8/16/2022
what we know
what we know
Top-Secret Documents at Trump’s Mar-a-Lago: What We Know
By Intelligencer Staff
The search warrant used by the FBI was unsealed, and it shows potential violations of the Espionage Act.
8/16/2022
early and often
early and often
Ask a Whistleblower: How Much Trouble Is Donald Trump In?
By Kerry Howley
Advice from another guy who had his house ransacked in search of classified documents.
8/16/2022
early and often
early and often
The Drama-Lover’s Guide to the New Trump Books
By Margaret Hartmann
Love gossip but not enough to actually read the new batch of Trump books? Here are all the juicy, disturbing, and darkly amusing tidbits you missed.
8/16/2022
the sports section
the sports section
The Mets Are Great. They’re Also Great TV.
By Joe DeLessio
SNY’s creative broadcasts are matching the excellent vibes of this year’s team.
8/16/2022
the national interest
the national interest
Why Every New Trump Crime Just Makes Republicans Angrier at the FBI
By Jonathan Chait
But the Feds have not treated him unfairly.