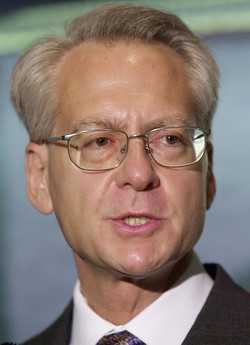 For conservative legal gadfly Larry Klayman, suing Bill and Hillary Clinton has been almost a life’s work — some would say a consuming passion. So it’s no surprise that Klayman is doing it again, this time on behalf of Jared Paul Stern, the fired New York Post freelancer at the center of last year’s “Page Six” scandal. The former president and the current presidential candidate, along with their playboy-billionaire pal, Ron Burkle, the New York Daily News, and Daily News reporter William Sherman are defendants in Stern’s just-filed lawsuit. He alleges that they conspired to slander him, deprive him of a job, and inflict emotional distress by accusing Stern of trying to extort money from Burkle in return for more respectful coverage in the Post’s “Page Six” column. The suit claims that Stern remains unemployed and suffers from depression, back pains, dizziness, hypertension, and other maladies months after a federal investigation of him fizzled. “Jared contacted me a couple of months ago and asked that I represent him,” Klayman said after the suit was filed Thursday in New York Supreme Court. “I took the case because I sympathized with Jared’s situation. I’ve always been for the underdog.”

Indeed, Klayman has represented such Clinton antagonists as Gennifer Flowers and Kathleen Willey in various unsuccessful legal actions, and he once sued Hillary Clinton, James Carville, and pornographer Larry Flynt on behalf of former House Republican impeachment manager Bob Barr, the former Georgia congressman who had a memorable cameo in the Borat movie, in a failed attempt to collect $30 million for “loss of reputation and emotional distress.” In Washington legal circles, Klayman became notorious for his terrifying persistence and off-the-wall questions, once grilling White House aide Harold Ickes about his cats. Klayman reveled in his celebrity and cable-television appearances before he moved to Miami four years ago to wage an unsuccessful Senate campaign and start the Klayman Law Firm. But he points out that he’s a “nonpartisan” litigator, having unsuccessfully sued Vice-President Dick Cheney for the records of his secret Energy Task Force meetings, “and I sued W over the illegal wiretaps,” he says. Back in 1999, he even sued his mother. Stern said he hired the 55-year-old Klayman, on terms that neither will disclose, because “he was the best man for the job.” Stern indicated he still might add defendants, including the Post. As for Klayman’s litigious history with the Clintons, “it was a consideration,” Stern said, “but it’s not really about him.” Maybe he should tell that to his attorney. —Lloyd Grove