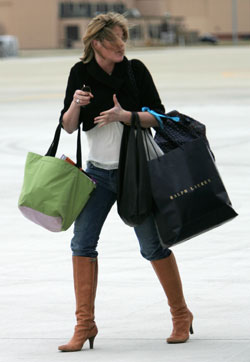 Presumably still trying to shuck off that Regan stink, HarperCollins announced today that it has acquired world rights to Jenna Bush’s Ana’s Story: A Journey of Hope. The “young-adult, narrative non-fiction project” will focus on a “seventeen-year-old single mother who was orphaned at a young age and is living with HIV.” Featuring the photographs of Mia Baxter, Jenna Bush’s book is based on photo diaries she assembled while interning for UNICEF in Panama. (Is “assembling” like “deciding”?)
Jenna is not the first First Daughter to hit Amazon, but the book deals usually involve dad (with the great exception of the prolific Margaret Truman). Take Jimmy and Amy Carter’s children’s books or Dorothy Bush Koch’s books about dear old H.W. Even vice-presidents’ daughters get some shelf space: Holla, Mary Cheney, author of Now It’s My Turn. Trend-watchers will recall that the Gore girls also got into the publishing game, Karenna with Lighting the Way, about nine women who shaped American politics, and Kristin with a roman à clef about life in D.C., Sammy’s Hill. Barbara, get on it!