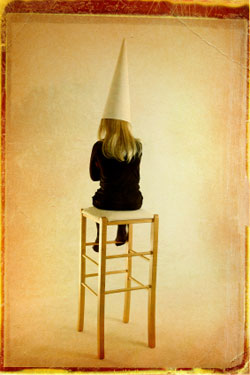 In this installment of our remarkably lax-on-ourselves annotated errata, we’re not quite apologizing for a Nader flub, a Central Park slight, and another Brooklyn border gerrymander. But we do find it necessary to clarify a few things.


1. Does Nader Love Shysters?
A new regulation that seeks to class up lawyer advertising has a side effect of impinging on free speech — the rule forces firms to label their law-update e-mails as advertising, dooming them to the bulk bin. An organization the Times called “the Ralph Nader group, Public Citizen” took up the cause, and the Ralph-to-the-rescue angle seemed so irresistible we blithely rereported the tidbit. Funny thing, though: Everyone’s favorite 2000 spoiler quit Public Citizen in 1980 (“Although,” a reader writes, “I imagine he would support Public Citizen’s involvement in the case”).
Verdict: What we have here is a rare chance to non-apologize for a factual error by triumphantly yelling, “It’s not us — it’s the Times.” We’re taking it.

2. Who Built Central Park?
Why, Frederick Law Olmsted. No? A reader alerts us to the fact that the great park’s design was born in collaboration with Calvert Vaux, whom popular history has consigned, it seems, to the status of Olmsted’s own Tenzing Norgay.
Verdict: We stand not quite corrected but certainly supplemented.

3. Where Does Boerum Hill End?
In our last installment, we debated the borders of Park Slope; this time, no less than the president of the Boerum Hill Association chimes in to give us a hard and fast definition of the nabe’s perimeter: “Court Street and Fourth Avenue, from Warren to Schermerhorn Streets.” Our editorial guidelines concur with Sue Wolfe on the enclave’s eastern, western, and northern borders but draw a more jagged line in the south (sometimes along Wyckoff, sometimes Warren, and, on one block, St. Marks).
Verdict: Like the war on terror or the war on rats, the neighborhood-boundaries argument can only end in stalemate.