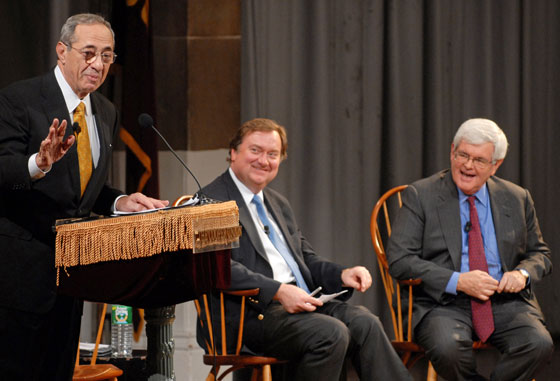 Last night’s non-historic Cooper Union face-off between famous formers Newt Gingrich and Mario Cuomo, billed by its organizers as a tribute to Abraham Lincoln’s actually historic 1860 speech at the same location, was explained as a challenge to 2008’s presidential candidates to campaign less in the modern, sound-bite-y style and more in the august Lincoln-Douglas tradition. A sedate, professorial crowd (read old) turned out to watch this exercise in bar-raising, at which at each speaker was given a full 30 minutes to orate. Gingrich went first and acquitted himself nicely, getting ovations for his emphatic bureaucracy bashing — “the machine doesn’t work!” — before finishing with some heartstring-pulling fearmongering, naming his two New York City grandchildren and declaring that he “fears for their safety.”

Cuomo, up next, strove for eloquence and landed on amusing, denouncing the thought that New York City kids “will grow up to hear the sound of gunshots before they hear the sounds of an orchestra.” With nothing actually at stake for either gentleman, it was easy enough for them to remain civil. The only bit of action came when Cuomo, while attacking Bush’s pro-life stance, was interrupted by a Bush supporter. Gingrich called Cuomo a “great orator,” and Cuomo, dodging moderator Tim Russert’s pressure to endorse one of the Democrats, answered that Gingrich should run for president. Group hug! “It will be the first time since 1944 that both parties will nominate a New Yorker,” Gingrich predicted. “One of whom actually sounds like a New Yorker.” So much for that hug. —Amos Barshad

CORRECTION, March 1: Cuomo’s criticism of Bush’s pro-life stance was interrupted by a pro-life Bush back, not a Cuomo supporter, as this item originally said.