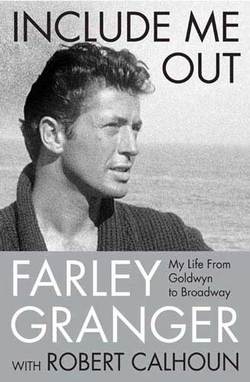 Perhaps best known for his roles in Hitchcock’s Rope and Strangers on a Train before ditching Hollywood for the New York stage, handsome Farley Granger (now 81) slept with some of the biggest names in mid-century entertainment (Ava Gardner, Leonard Bernstein, Arthur Laurents) before settling down with TV producer Robert Calhoun on the Upper West Side. The two recently wrote Include Me Out, Granger’s sweetly chatty memoir of evolving from the wide-eyed pretty boy of the postwar Goldwyn lot (the title refers to his long, hard-won effort to break his contract with the studio) to a liberated man of cinema, TV, and the theatuh, working and playing with the likes of Helen Hayes and Aaron Copland. So how does he feel about today’s pretty boys? Find out after the jump.

Tell me about your life in New York right now.
I’m a huge movie fan so I go to the movies a lot or have lunch at Café Luxembourg with old friends like Jimmy Mitchell. He was one of the Agnes DeMille dancers, and now he plays Palmer Cortland on All My Children. We’ll gossip about mutual acquaintances like Arthur Laurents.

Whom you had one of your first relationships with. How was he in bed?
[Long pause.] I don’t want to talk about him. I’d be too tempted to say something mean.

Ouch! What about Lenny Bernstein as a lover?
Very passionate.

Aggressive like his conducting?
I’m not going to get specific with you. He was terrific to be with.

Of all the men and women you were with, who attracted you most?
I guess Ava [Gardner]. First time I saw her, I thought, Wow, that lady is something else. She was fun, and she wasn’t into Hollywood game. The women I’ve loved, I’ve loved completely, so I can’t rule out that side of me.

But you don’t like to call yourself gay or even bisexual.
We’re not going to emerge as untarnished until we get rid of labels. Until we have the perception that sex is only part of what makes up a human, the enemy will always be able to say, “He’s just a faggot.”

You see a lot of theater in New York. What have you liked recently?
I know that critics knocked The Vertical Hour, but I liked it. I thought Julianne Moore was terrific. We were on As the World Turns together, though our storylines never crossed. When I went backstage to see her after the play, she took my breath away. I forgot how tiny and beautiful she was.

What young male actors do you admire?
Ed Norton. I just love him.

Would you date him?
Probably, but I don’t think he’s gay. Ryan Gosling is No. 2 for me. And though I know there are rumors, I don’t care if Tom Cruise is gay. I’m not a huge fan because I think he’s basically limited as an actor.

Where else do you eat besides Luxembourg?
I go to Orso anytime I go to the theater. Their little pizzas are still terrific!

You’ve done your share of musicals, including The King and I with Barbara Cook in 1960. What’s the best musical of the past decade?
The revival of Sweeney Todd. Fabulous.

What about the current revival of Company?
I enjoyed it, but it didn’t work as well.

You would have made a good Bobby, I bet.
That would have been a good part for me, wouldn’t it? —Tim Murphy