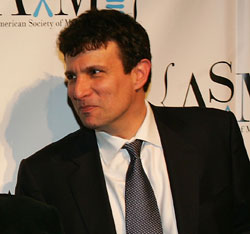 Though they probably made it difficult for j-school students to score juicy interviews, recent revelations of superpower editors in the media have made us feel that we’re not sure the days of the shy and retiring redliner — RIP, William Shawn — were so bad after all. In today’s Independent, New Yorker editor David Remnick rapidly reduces our opinion of him as he tells us that he went to a fancy college — “God knows why” — his worst trait as a journalist is his “lack of concentration,” Iraq is “so depressing,” and though he doesn’t “write so much,” as the editor, he gets to be himself “with all its grave limitations.” False modesty is all very well, but Remnick’s ruminations about himself as a child make us worry that some of those grave limitations have totally carried over into the magazine’s present incarnation. Remembering his own precocious youth, Remnick confesses: “If I come across a kid who’s 12 or 13, who seems a little pretentious and doesn’t really quite know what he or she is talking about, I think that’s OK. It means they’re interested.” Ladies and gentleman, you heard it here. The mystery of Adam Gopnik’s ascendance at the mag … SOLVED.