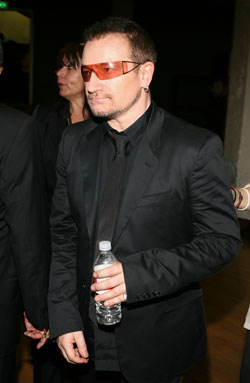 Though you might have heard something about maternally inclined stars like Angelina Jolie, Madonna, and Oprah caring for some kids in the name of child welfare on the African continent, no superstar has as yet made a really chic effort to solve the country’s problems. Sure, Bill Gates’s wife, Melinda, upped the camera quotient on that couple, but they don’t carry the same paparazzi punch as a face-painted Gwyneth in an “I Am African” ad. Enter Bono and Vanity Fair, which is letting the U2 front man edit the July issue. “Africa is sexy and people need to know that,” Bono said of his editorial agenda. It’s not exactly clear yet how the marriage of Graydon Carter, debt relief, “Pride (In the Name of Love),” and AIDS is going to resolve a few hundred years of turmoil, but whatever happens, no way is it going to be frazzled, blonde, and fifteen pounds overweight: “We are trying to deal with the Sally Struthers thing … When you see people humiliated by extreme poverty and wasting away with flies buzzing around their eyes, it is easy not to believe that they are same as us,” says Bono. So what to expect? Carter claims that “a co-mingling of brands will help sell a tough subject,” so we’re seeing sand to the horizon, Jil Sander on the suffering, and some kind of headdress on Dominick Dunne.

+Comments Leave a Comment
‘Vanity Fair’: We Are All Africa, Ad Pages