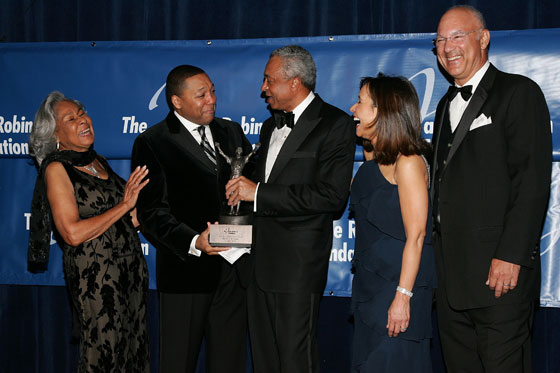 In April, it’ll be 60 years since Jackie Robinson broke baseball’s color barrier, but as the scholarship foundation in his name gathered at the Waldorf-Astoria on Monday to hand out awards to modern-day African-American pioneers like Spike Lee, Merrill Lynch chairman and CEO Stan O’Neal, and BET founder Sheila C. Johnson, the speeches were mostly about how little race relations in this country have changed. MC Bill Cosby advised one black college student there to change his last name from Robinson to Robinsky. “They’ll think you’re white!” Cosby said. “How do you think Stan O’Neal got ahead? They thought he was an Irishman.” After the jump, Jackie’s daughter Sharon, an educational consultant for Major League Baseball, answers a few pressing questions.

Are you disappointed that the new Mets stadium won’t be named after your dad?
Not in the least. I knew about it from the beginning. It’s big business. And the Mets have been enormous friends to my family and the Jackie Robinson Foundation, so we’re just happy that they’re getting a new stadium and we’ll have a wing in it or a room in it, whatever we’ll have, in my father’s name.

What about Yankee Stadium?
Oh, I will actually miss the old Yankee Stadium. Obviously, I have to tread very lightly here because the Dodgers and the Yankees battled so much through the fifties, but I actually love Yankee Stadium as it is, and to be in Yankee Stadium is very fun, and the fans there are pretty amazing. And the visibility is always good.

What would happen if you wore a Yankee hat in public?
Oh, it would be very bad. I’ll give you an example. I was with Len Coleman, the president of the National League, sitting in his box during the World Series. And the thing is, at Yankee Stadium, sometimes you just get caught up. Plus I’m a New Yorker. So there was this amazing home run, and all of Yankee Stadium jumped up, and I just got swept up in the jumping up. And Len Coleman took me by my arms and said, “Sit down! Don’t forget where you are! These are the Yankees!” But, yeah, I love baseball, and when you’re in a stadium, whoever’s house it is, I tend to root for them.

+Comments Leave a Comment
Yankees Too Hard to Resist

THE FEED
11:05 a.m.
hurricane season
hurricane season
Tampa Could Be a Bull’s-eye for Hurricane Ian
By Matt Stieb
The quickly intensifying hurricane could bring storm surges of up to ten feet to the low-lying Tampa metro.
10:37 a.m.
early and often
early and often
If You Really Love Democracy, You Can’t Love the U.S. Senate
By Ed Kilgore
Mitch McConnell and Kyrsten Sinema are big on respecting the Senate as an institution, but valuing democracy means working to minimize its impact.
8:00 a.m.
at home in asian america
at home in asian america
For Domestic Workers, the Asian Class Divide Begins at Home
As told to Arya Sundaram
Five nannies from the Philippines, Nepal, and China open up about what it’s like to work for their Asian American employers.